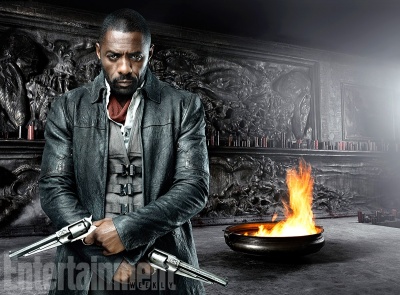 If you're going to rant on a horrible comic book interpretation, at least try to mark your name.--PaperCake 16:16, 22 November 2016 (EST)

Chill out, this is one of those adaptations where they don't care what skin color the original character is. I'd be more annoyed if they made Roland a woman to be PC for today's audiences. Idris Elba is an awesome actor. Excalibur01 (talk) 17:52, 22 November 2016 (EST)

This is probably where this off-topic discussion should stop, but I'd like to point out that Stephen King himself said this about Elba's selection: “I love it. I think he’s a terrific actor, one of the best working in the business now." If the author of the original work approves, there's no need to argue further. --Sergeant Simpleton (talk) 21:28, 22 November 2016 (EST)

First off, I apologize for my post, which is now signed. But it's going to take alot to drag me away from my stance here. To be fair, I haven't seen Elba in many roles, let alone any that impressed me. I don't know that the casting choice was a political one, but it wouldn't surprise me if it was. You have Susannah to fill the black role(she is also a woman, so both groups will be satisfied). Roland isn't black,; I should probably drop the issue there, but I'm not. I'm probably coming off as the obnoxious, ranting fanboy, but if that is the cost for wanting a proper representation of a great series and quite possibly the best character in all of fiction, so be it. --H3nry8adger1982 (talk) 12:04, 23 November 2016 (EST)H3nry8adger1982

First off, nobody likes to admit to being wrong. I think everyone can agree on that. But, I'm afraid I have to here. After finishing the series and watching the trailer, I want to see this! I still would have liked to see a more direct adaptation, but I now see where they're coming from with Elba. I don't think him the best choice , but I can accept it, as I hope you all can accept my apology on the part of my fanboyism that likely irked some people. Now what is the general consensus on the trailer?--H3nry8adger1982 (talk) 10:50, 3 May 2017 (EDT)H3nry8adger1982

The new trailer provided some good shots of the Gunslinger's (Idris Elba) custom Remington 1858s, as well as the strange operating features they each have. The most notable feature of the guns, differentiating them from unmodified Remingtons, are the addition of swing-out cylinders (note that while the Remington 1875 had a swing-out cylinder, these are most definitely 1858 New Army revolvers based on the octagonal barrels). The guns don't appear to have cylinder release controls of any kind, and the right- and left-hand guns are each individually customized so the cylinders swing inward related to the shooter's hand (see screenshots). When the guns are firing, the Gunslinger appears to be firing them in double-action, despite the Remington 1858 being a single-action revolver. Upon closer inspection, there are shots where it appears the Gunslinger is simply pulling the triggers and the guns are firing without any movement of the hammer at all. While the gunshots appear to be CGI, they appear to be styled after a two-stage black powder weapon (There's an initial spark in the cylinder, followed by the muzzle flash. Appropriate for the Remington). The Gunslinger is also seen wearing a custom gun belt rig mounted with holsters, individual cartridge loops, and larger loops for 6-round "moon clips" that he's seen loading into the guns by tossing them in the air and catching them with the open cylinders. --Caldwellb734 (talk) 13:34, 3 May 2017 (EDT)

The Gunslinger (Idris Elba) with his custom Remington 1858.

The Gunslinger's custom gun belt, with both individual cartridges and 6-round "moon clips."

The two-stage firing is seen. The trigger is pulled and sparks fly from the cylinder...

...and then the muzzle flashes.

The Gunslinger does an impressive speed-load, tossing cartridges into his revolver. The custom swing-out cylinder is seen here on the right-hand gun (the left hand gun's cylinder swings out on the opposite side).

While this shot is blurry, the left-hand gun's cylinder clearly swings out the right side of the gun so it swings inward in relation to the Gunslinger's hand.

The Gunslinger practices his grip with Jake (Tom Taylor). Note that while both guns are seen with swing-out cylinders, no cylinder release latches are seen.

The Gunslinger fires his Remington.

The Gunslinger aims his Remington, which starts to glow and show the custom engraving.

The best shot of the Remington in the trailer, showing what appear to be .36 or .38 caliber chambers (one of which appears to be loaded).

I have been watching various threads about these revolvers since the pics first came onto the net and have been waiting for the trailer to come out before I could say anything. I built these revolvers from scratch for the movie, they are indeed based on a Remington 1858 but that is where it ends. There are no original working parts in them. We had to redesign them externally to be 25% bigger, with swing out cylinders and internally for the double action. They are, for reason which I will talk about once the movie has been released, chambered in .38 special. The opposing cylinder swing on the pair was an idea that I had while we were coming up with cool ways for the guns to be reloaded. The rest will have to wait until the movie is released in August.Lance Peters (talk) 16:56, 4 May 2017 (EDT)

Wow! It's a privilege to be able to speak with the one who actually designed guns seen in a movie! I'm looking forward to hearing more about them

why has no one done this page yet?

I did a little digging and the armourer for the movie is Andrew Germishuys. Here are some links for him... https://www.imdb.com/name/nm5390453/ https://www.instagram.com/andrewgerm_za/?hl=en

I stand corrected (and shame on me for not reading the entire discussion here) Lance Peters was the armourer for the movie and the builder of the very unique Remingtons. I've been having an email conversation with him and with his permissions may develop an article about these guns for publication in True West, Man at Arms, or the SASS Cowboy Chronicle about their construction, the variations, and use during filming. --Sass15029 (talk) 13:45, 4 June 2020 (EDT)