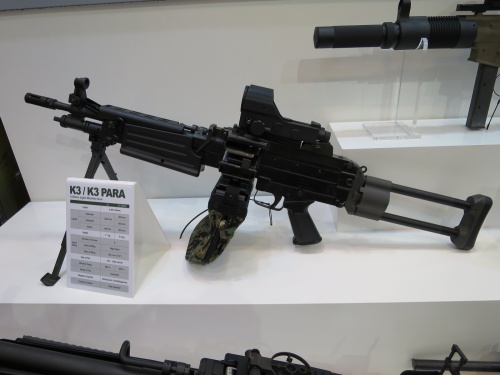 Minor FYI, to those wondering if a SAW in a movie/TV show is the Daewoo K3 or an actual FN Minimi/M249 variant: The K3 tends to appear almost exclusively in productions filmed in British Columbia, Canada. The reason for this is that the major armory located in Vancouver, which is called Felcan Enterprises (or just Tom Felcan, after its owner), only seems to have K3s and not real FN Minimis in inventory. So rule of thumb is that if you are watching a show that was filmed in Vancouver (or some other area of British Columbia), you are probably looking at one of the K3s. If the movie was filmed outside of British Columbia (i.e. the U.S. or Europe, or even other parts of Canada), it's probably a real FN Minimi. Check the Internet Movie Database if you are trying to determine the filming location of the production.

The only exception to this rule so far has been Rules of Engagement; the embassy siege in that movie, which featured Daewoo K3s mocked up as M249s, was filmed in Morocco. I would speculate that the weapons used in that scene were imported from movie armories in other countries, so it's possible that Felcan Enterprises provided the K3s for that show, too. -MT2008 11:04, 30 June 2011 (CDT)

In the extended cut, Blondie empties the K3 at the charging zombie soldiers. The machine gun is recognizable as a K3 due to the shape of the gas tube and front sight.

Is there any reason why these tacticool'd-up K3s are specified as being "modified to resemble the FN Minimi SPW"? I for one do not see any particularly notable similarities between these K3s and the SPW, and also see no reason why the creators of these films has to make the machine guns a FN Minimi SPW. --Wuzh (talk) 08:40, 17 May 2020 (EDT)

I put that language in there years ago; I admit that it’s probably unnecessary nowadays. Bear in mind that when I wrote that language originally (2010 or so), most U.S. military-issue M249s were not yet equipped with the Product Improvement Kit, which includes the rail forearm, so I must have figured that the intent of the armorers was to make the weapons resemble the Minimi SPW, as opposed to M249s.

It is likely that many K3s were modified to stand in for M249s. However, I find it very unlikely that K3s are being modified to stand in for SPWs; not only is the SPW itself a quite rare weapon that was not officially adopted, the very distinctive heat shield of the SPW is never shown on any of these K3s. They are similar in that they all use these railed handguards (not sure where did the armorers get these), but it's really a stretch to say that they are standing in for SPWs.

I say we should rephrase them as something like "Customized with railed handguards" or something. A more complete and thorough description of what is being added or modified would also help to clarify the situation. --Wuzh (talk) 13:13, 25 May 2020 (EDT)