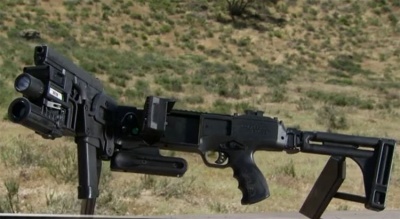 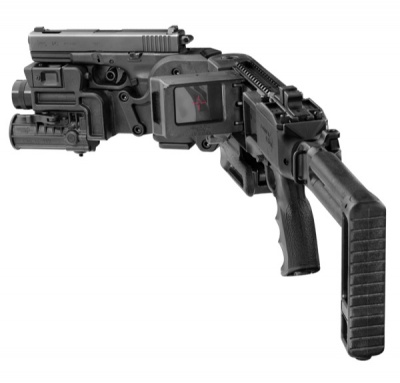 I think a shotgun would go nicely on one of these, especially in real tight quarters. I'm suprised that wasn't the first thing they tried to put on it. Do you guys think it would need any modifications to it for a shotgun? I was thinkin something like the Masterkey, but a Saiga could probably fit on the one made for the AK. That's One Angry Duck 00:46, 25 January 2011 (UTC)

Does this really belong?

The CornerShot itself is not a firearm (although I'm sure you can bludgeon someone with it.) It's at most, an accessory, like an ACOG or a Magpul stock. Does this really deserve a page then? --funkychinaman 04:36, 25 January 2011 (UTC)

The dynamite page got deleted, tasers are non-lethal weapons, and grenades are legitimate weapons. Without already possessing a real firearm, the CornerShot is just a fancy camera. --funkychinaman 14:37, 25 January 2011 (UTC) (sorry, forgot to sign in.)

Its been used in enough castings where i believe it should be included on this site. Its gun related and has a name and totally cool and its been on tv and movies and most likely a video game. Why not have a page?--Spades of Columbia 17:26, 25 January 2011 (UTC)

Would you give this [1] or this [2] their own pages? Because they're basically the same thing, only they're from the `40's, and without a Future Weapons episode to hype them. And I refer to the rules. It's not a firearm. I don't think anyone can argue that it is. --funkychinaman 18:30, 25 January 2011 (UTC)

Um, a bent barrel accessory is not basically the same as a whole platform for aiming the gun. You'd be better off asking if something like CROWS should have an article seperate to the M2 Browning. Though I'd say here it's an exception because a non-mounted device of this kind is fairly unique (you attach a gun to a Cornershot, whereas you attach a Krummlauf barrel to a gun). Evil Tim 01:50, 22 November 2011 (CST)

So did any of those pictures come from a movie or tv show...does a company manufacture those for production...has Angelina Jolie's beautiful hands ever grace any one of those stupid ass pictures you put up. Get real kid.--Spades of Columbia 22:25, 25 January 2011 (UTC) didnt want to waste time to sign in to respond to such a stupid comment.

Status as a weapon aside; deleting this article would mean that any appearance of a CornerShot would require a description of the device in the article instead of just linking to this page. It just seems more practical to keep this single description instead of deleting it then going back and adding a (currently unneeded) description to each article. Just like how we don't put lengthy descriptions of weapons in articles; we simply describe it's use in that particular media and link to a single page that describes the weapon in greater detail.--PistolJunkie 00:41, 26 January 2011 (UTC)

And before anyone tries to counter with "but we don't do that for tasers, dynamite, etc"; those are all fairly well known within pop culture. Ask Joe Layman about any of those, you'll get a serviceable answer (it may not be completely accurate, but they at least grasp the basic concept and uses for each). However, relatively few people know about the CornerShot (and most who do know it as "that weird gun that was in one episode of Future Weapons/CSI: Miami a few years back). And I can personally testify to the difficulty of explaining to Joe Layman that there is a gun that:
--PistolJunkie 02:37, 26 January 2011 (UTC)