Lt. Marion 'Cobra' Cobretti (Sylvester Stallone) is to said to also carry an ASP 9, most likely as a backup gun. In the current release of the film the ASP 9 is not ever seen being used. It may have been rented out for the film and the scenes were cut or script changes made the gun unnecessary to use. 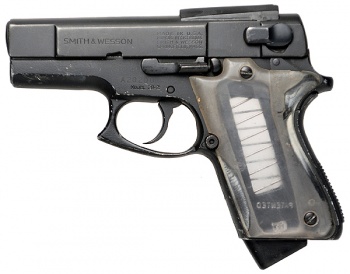 ASP 9 - 9x19mm. This is the firearm used in the production of the film Cobra.

In the magazine, Special Weapons And Tactics, August 1986, Volume 5, No. 4 there is an article on the movie.

There is a photo of the pistol with this caption:

"A Colt Series 80 Gold Cup, with a 9mm conversion and custom ivory grips with the head of a Cobra , was used as Cobra's pistols."

How it is described in the article: "Cobra's pistol is a .45 ACP (Automatic Colt Pistol), a Series 80 Gold Cup Government Model. Its magazine holds seven rounds, plus one in the chamber. Their ivory grip was custom made; on it is the head of a King Cobra. The finish is blue steel. The 9mm conversion unit was also made by Colt, including its top slide and barrel. the conversion unit makes the weapon highly versatile in that it utilizes the same caliber ammunition as his other remarkable weapon-a JATI 9mm submachine gun."

I believe this is inaccurate, because the Series '80 has a different trigger and hammer than his has, also read comments below.

However, the magazine (loaded with Glaser Safety Slugs, BTW) and the barrel don't look like they belong to a .45 ACP pistol. Maybe it is a 9 mm or .38 super auto handgun but, if memory serves, the Gold Cup was not offered in these calibers. The "Elite IX" and the "Super Elite" were offered in these calibers, but they had stainless steel frames (maybe it is a custom pistol?) It has been converted to 9mm.

Not sure if it is truly a Gold Cup, when he pulls the slide back, there isn't a guide rod below the barrel, as well as the Colt Gold Cup logo. That and that it appears to be a 9mm or .38 Super leads me to think this is a custom gun made to have similar features of the Gold Cup. And it is definitely a 9mm you can make it out in picture 3 right under the ejection port. Edit- removed this from the page and placed it here where it belongs. - RedJedRevolver

I would say that it's one of Stembridge 9mm conversions of a Colt Series 70 Cold Cup. I have seen some of there barrels in the junk bin as they converted 45 to 9mm. I will check it out tomorrow the 18th and get back to you.- Phoenixent

Thanks for the clarification Phoenixent, I knew it had to be based off of a Gold Cup but was not o your good ol' standard GC. RedJedRevolver

This is an interesting link regarding Sylvester Stallone's hypocrisy regarding "gun control" and his own application for a CCW permit (and being granted one) and his on-the-record statements advocating the destruction of the 2nd Amendment and house to house searches/confiscation of firearms in America. http://blog.riflegear.com/articles/the-hypocrisy-of-sylvester-stallone.aspx

Stallone would be screwed if he had to shoot someone wearing a thick jacket using those safety slugs-S&Wshooter 21:39, 11 November 2009 (UTC) 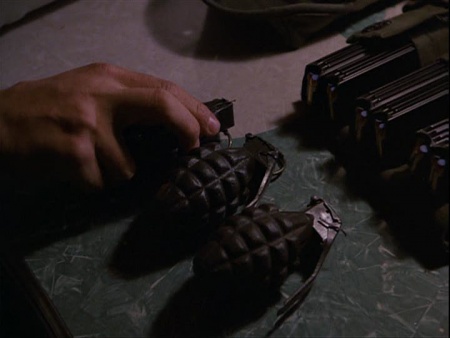 All I know about Glasers are that they are expensive, do tons of damage to soft targets and that they don't penetrate very well, which is why Air Marshals don't use them-S&Wshooter 23:41, 11 November 2009 (UTC)

The information in this link, especially the two customter reviews of the Glaser Safety Slug, disagrees with you guy's assesment of it. http://www.cheaperthandirt.com/73123-5.html

I'm going to take the word of the U.S government over that of some random person on the internet-S&Wshooter 21:14, 16 December 2009 (UTC)

That gun image is listed as being used in this movie, but no one seems to be able to figure out where it was used.--PistolJunkie 14:06, 16 November 2010 (UTC)

So if a gun is allegedly in a movie, but no one knows when or where, does it really belong? Would anyone object if I move it to the discussion page? --funkychinaman 23:41, 16 November 2010 (UTC)

This is the response I got from MPM when I asked him about it a few weeks back. --Predator20 00:04, 17 November 2010 (UTC) Syd Stembridge provided the guns for the film and he swears that it was a screen used gun, perhaps in Sly's waistband, but I've questioned this on multiple occasions, and I usually don't argue with the armorers who were there :) MoviePropMaster2008

If we have the screen used ASP, maybe we should have more of a description of it in the film, rather then just "Cobra uses a ASP".

Just watched it on Netflix (you can stream it "instantly") and I didn't see an ASP in his waistband, or even on the table when he cleans guns or readies his weapons toward the end. I had not seen it since I was a kid, and I struggled to get through the whole thing. --James3 16:49, 21 May 2011 (CDT)

In the paragraph regarding the Ithaca 37 the description says it has an extended magtube. Is this really a correct description when the shotgun was delivered with that length magtube from the factory (I have one myself)?

In contrast to the Remington 870, Mossberg 590, and Winchester 1300 the Ithaca 37 lends itself poorly to magtube extensions due to the mag lug on the barrel (see page 19 in the Ithaca M37 Owners Manual.)

To me an extension is something that is added onto something else to make it longer (cue the sexual innuendos) and is not the correct description for something that is already long without any addition to do so. --Swedeshooter (talk) 10:11, 18 September 2014 (EDT)

It's a matter of semantics. We're acknowledging it's not an extension of the normal tube, but "extended" in the same sense as "extended life battery" or "extended mag release." --Funkychinaman (talk) 13:44, 18 September 2014 (EDT)

It's still an appropriate enough term with which to denote shotguns with that longer tube as opposed to ones without, regardless of whether or not it's strictly an 'extension'. It's the same as us putting 'R' on the newer SIG pistol model numbers even though that's not what they're called from the factory; we use that to differentiate the models on this site in terms of reference, despite it not being 100% technically accurate. That aside, as said, it's really a case of semantics, and in that regard, the term still isn't really incorrect as far as I'm concerned; 'longer' and 'extended' can be used interchangeably in a lot of cases, this being one of them - As stated, it's still an 'extended' mag tube compared to the short one, even though it's not actually an extension of the short tube; the term is still correct enough to be used, certainly correct enough to not really bother going about changing it. And that would be the alternative - Going through all of those entries on the site and changing the term to 'long mag tube', which to me sounds funny, and more importantly, doesn't seem worth all that trouble. StanTheMan (talk) 14:11, 18 September 2014 (EDT)