typical comment from a high school kid! That image of her is from 1978, do you know how long ago 1978 was? 31 years ago. And she was already in her mid 20s by that time. The comment about her being hot isn't stupid. The "I wonder what happened" is really stupid.
You don't have to be such a backpfeifengesicht. I was just saying that Ms. Fisher has no resemblance to her former self at all-S&Wshooter 21:42, 13 October 2009 (UTC)

Any idea why the pic overlaps the table if you place it about the table when editing? I had to move the picture code to the bottom to get it to work right.--Mandolin (talk) 19:11, 27 December 2016 (EST) 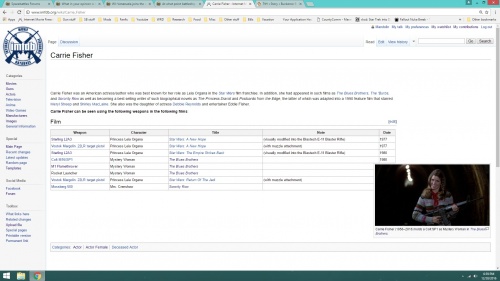 It looks like it is misbehaving with one of the add spaces. I can't seem to replicate the error though even by disabling add blockers and changing the skin, so I don;t know why it is happening for you. If you change your default skin to anything but the default (I use MonoBook for example) then the adds don't appear, which not only gets rid of the adds themselves but also gets rid of the odd white spaces where the adds used to be if you use an adblocker. --commando552 (talk) 06:40, 29 December 2016 (EST)

I heard once "There is another." And yet no other will ever be able to replace Carrie Fisher. But now even her mother is with her. Debbie Reynolds, mother to Carrie and Todd Fisher, died just a day after her daughter. --Mazryonh (talk) 23:14, 28 December 2016 (EST)