I initially IDed these are full-sized USPs due to the slanted trigger guard and USP Compacts have squared off trigger guards, but the barrel seems a bit short in these shots for a full sized USP. --Funkychinaman (talk) 14:53, 26 June 2013 (EDT) This is just an optical illusion - the camera angle.--Pandolfini (talk) 15:20, 26 June 2013 (EDT) 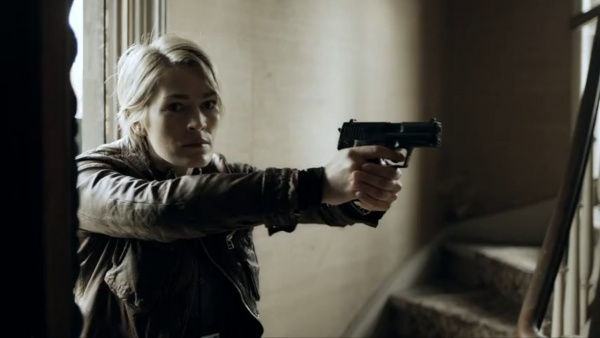 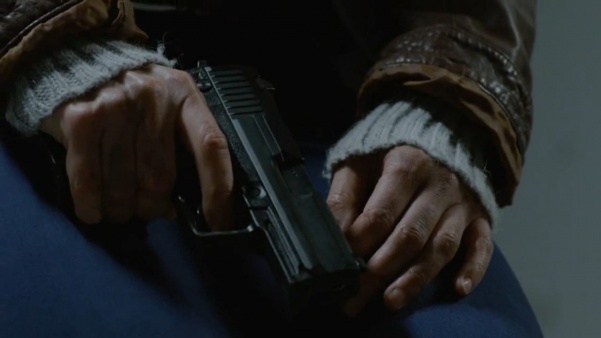 Detail of her sidearm in episode "Shadow of the Past" (S1E6).

I agree, something is off about them. I reckon they may be Rohm blank fire only replicas, I think they have a shorter slide but the slanted triger guard. --commando552 (talk) 17:44, 26 June 2013 (EDT) 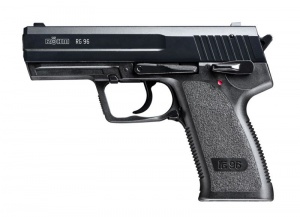 On looking at it now it probably isn't the Rohm, didn't remember it having that slope on the frame. Also on closer inspection the Rohm has some kind of protruding catch at the rear of the accessory rail inside the trigger guard which this doesn't have. However looking at the rail 100% proves it isn't a real USP, as on the full size USP the groove on the rail extends back past the front of the trigger guard, as opposed to on this gun where it stops level with the front of the trigger guard like it does on the USP Compact. Is this a firing scene, as if it is I'd guess it is a blank firer made by another company, but if not then I would guess it is an inaccurate airsoft replica. --commando552 (talk) 18:25, 26 June 2013 (EDT)