There's a limit of 10 sreenshots per weapon and it broken many times, the MP5A3 section has almost 30 pictures, far too many. Please start deleating exess pictures.--MAndolin 19:59, 14 September 2011 (CDT)

Nice. Really great that some Czechs are here too :) "NOVA" :D Page needs more screencaps. And im prety sure i saw G36 too.

That isn't a Milkor MGL, as butt plate on the MGL stock dosen't pivot down when folded like that, and it lacks the tube above the cylinder which forms the back bone of the launcher. I highly doubt it is any kind of grenade launcher, as the bore looks about the same width as the woman's finger. More likely it is an Armsel Protecta shotgun that is being depicted as a multi shot grenade launcher, as is commonly done in TV shows. --commando552 04:47, 29 March 2011 (CDT)

Also, the Bulgarian magazine on the AK-47 could indicate that it is an Arsenal AR fitted with wooden furniture. However, if this was the case it would look identical to a Type-III AK-47, so there would be no way to know. --commando552 06:32, 29 March 2011 (CDT)

Seriously, the number of unidentified guns in this article is just ridiculous. I wouldn't necessarily say anything if they were obscure guns, or dressed up props, but all of them are pure vanilla common as shit guns like berettas or glocks. It really doesn't cut it when on the page there are 35 unidentified guns (a good few of which are clearly the same even if you don't know what they are) on a page with 66 total. If you genuinely can't identify a gun, put it on the discussion page asking for help, rather than making sections for unidentified guns, at least 6 of which are just Beretta 92FS's. I'm going to go through and identify what I can, but as I've never seen the show and have no idea of episode order someone else will need to make sense of it if I fuck it up. --commando552 17:13, 20 August 2011 (CDT)

I just cleaned up a good chunk of the handguns (this is the first time we've run across one of the more modern "Pre-B"s), I'll do a little here and there when I can to reduce you're workload.--PistolJunkie 22:57, 20 August 2011 (CDT)

Are you sure there is a shotgun in there? It already looks like the grapnel is propelled by a crossbow at the front, and possibly a compressed air tank at the back, so a shotgun as well would be overkill. --commando552 10:13, 23 August 2011 (CDT)

I've watched some crash mix videos for this show on Youtube, and the car related stunt work is quite spectacular, especially for a tv series. Can anyone who has seen "Cobra 11" tell me if the gunfights are over the top, like the car crashes, or are they more realistic? I searched Youtube and really haven't found any clips that include shoot-outs.--Phillb36 12:38, 24 August 2011 (CDT)

They actually are similarly over the top, as well as the entire plot of the series that inevitably ends in a big shoot/chase in almost every episode. That preview trailer for the upcoming season should give a good impression. http://www.youtube.com/watch?v=SgcWN1Yr9e4

The Handguns section is getting too big to effectively navigate. I know it's against the norm, but should we consider dividing it into Automatic Pistols and Revolvers? (and this barrage of "Unidentified X" stuff is getting absurd, especially when it's a gun that's already been identified elsewhere on the page).--PistolJunkie 19:02, 22 October 2011 (CDT) 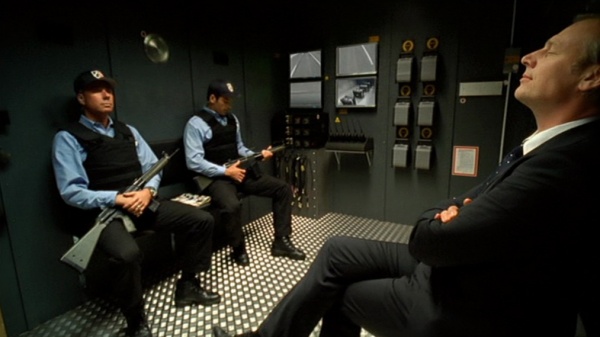