Registered to fix this page up :P took me 4 hours but its as good as its getting without more images. - Joey1666

This a SEAL Recon Rifle or a Mk 12 SPR with sliding stock? 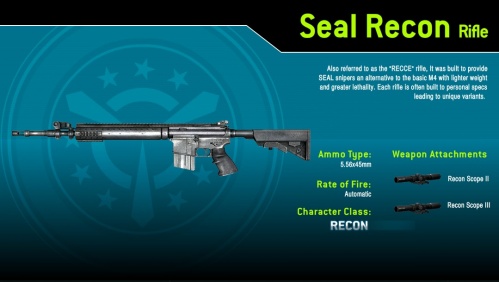 It's a MK12 Mod 0 with a Crane stock. I've seen pics of MK12s with almost every type of stock imaginable. The SEAL Recon Rifle actually has no standard configuration whatsoever other than a 16" barrel capable of firing any 5.56x45mm ammunition in inventory, instead being hand-built in-house by SEAL armorers tailored to each individual shooter's preferences. Spartan198 (talk) 09:53, 13 June 2014 (EDT)