Is it just me, or is the rail handguard on the AR-15-thing copied from the Diplomats in The Expendables? It's out of scale, but that's just because they threw a G36 carry handle on the top. Anyway, Cash has a "hero" high-detail version, I'll get a cap when I'm home from work. Evil Tim 20:39, 21 October 2011 (CDT)

Towards the end of the game, Tyger private military contractors deploy proximity mines which may kill the player with shrapnel if he ventures too close. They shout, "Priming Explosive!" whenever a new one is added to a location where Batman has already been sighted. I know that these aren't truly considered firearms, but perhaps someone could add a section on them?

I don't think they're based on any real mine, I admit I haven't looked closely but they seemed to just be a disc with a flashing light on them. Evil Tim 02:13, 28 October 2011 (CDT)

Can someone at least post a close-up screenshot? We can call it the "unknown proximity mine" if it truly seems to be a fictional 'disc', instead of based on any real piece of hardware. Note that if you use the zoom function on Batman's cowl, you can capture a good picture of the device without actually getting close enough to detonate it in-game. --Katangais 02:40, 28 October 2011 (CDT)

We don't call it unknown if we know it's not real, and fictional weapons have to pass a "reasonably believable" test. I'll have another look sometime, though I've finished the game now so I'm not sure anyone will have them. Unless they're the same as the Riddler mines. Evil Tim 04:08, 28 October 2011 (CDT)

Just took a look, by the way, and although I can't get a screenshot (My printscreen button has a malfunction) it's definitely much more detailed than a flashing disc. Can't say I recognize exactly what the mine is, though. --Katangais 15:14, 29 October 2011 (CDT)

I'm still not sure, but I have now examined several close-ups of the proximity mines, and I think they may be TS-50s, which have a very distinct exterior design. --Katangais 20:44, 29 October 2011 (CDT)

Just a heads-up on this article; it's overlooking the unidentified revolver which appears on that sign inside the Gotham City Police Department's forensic lab, right near the door. --Katangais 00:02, 17 December 2011 (CST)

Other items not covered in this article include the two handguns from Batman: Arkham Asylum: Commissioner Gordon's Desert Eagle appears on the same "no concealed firearms" sign which was also featured in Arkham City's prequel. In addition, the Joker's Arkham Asylum pistol reappears in Arkham City, although it is not used. You can get a very close look at the weapon because it is sitting next to an open crate of other deadly gadgets in the Steel Mill's boiler room.--Katangais 15:08, 9 January 2012 (CST)

After Batman rescues the kidnapped doctor from Joker's thugs, he obtains a strange shotgun-like device with fore-grip that fires EMP blasts. Can anyone identify what it's based on? It has a hint of Mossberg 500 about it.

It's basically just the body of Batman's standard grapnel gun with a pistol-grip front from a super-short shotgun stuck on it, not really enough detail to say what kind and it's been fiction'd to the point it's not anything real anyway. The muzzle is just an electrode. Evil Tim 17:31, 11 January 2012 (CST)

So there is a new game, Gotham City Impostors, released on PC, PS3 and XB360. Features weapons based on real-life ones. Anyone played it and ready to make a witty page? --Masterius 02:42, 14 February 2012 (CST)

I don't see a problem with making this page, most of those weapons are easily identifiable as a specific gun, and are actually modelled quite well, just oversized compared to the characters. From what I can see in those pictures there is an M60, an SKS, a Ruger AC556K, an AR-18/Galil ARM hybrid (an actual hybrid, being exactly an AR-18 up to the handguard, and then changing to a Galil ARM, not like the pie in the sky "hybrids" listed on some gun pages), a Winchester Model 1892 and a Cobray Street Sweeper. --commando552 04:58, 14 February 2012 (CST)

The ban on cartoonish caricatures comes from the common issue of the weapons being very low in detail to match the animation style of the rest of the feature. While these weapons are oversized, they have a greater amount of detail than some video games that have long since been finished and added to this site. Arguing that their massive size makes them too much of a "caricature" is ridiculously pointless. Chitoryu12 10:59, 28 April 2012 (CDT)

What about Team Fortress 2? Their graphics are "cartoonish" as well and most of their weapons are oversized and even heavily modified to the point of being almost unrecognizable . Mr.Ice

Can't remember if it was present in the original Arkham City (at the least, I'm not booting up my old copy to look for who knows how long), but in the Return to Arkham edition, it has a HUD icon that depicts a bullpup sniper rifle. Here's a screenshot if anyone wants to try and ID it. --Mr.Ice 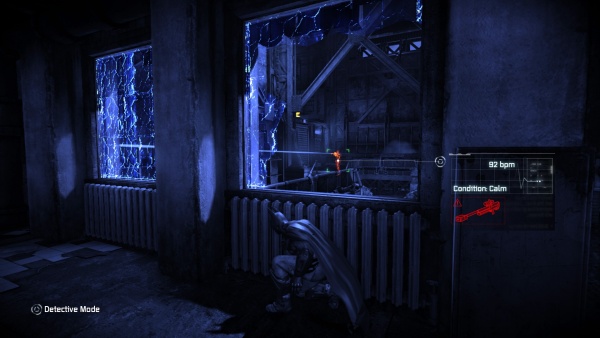