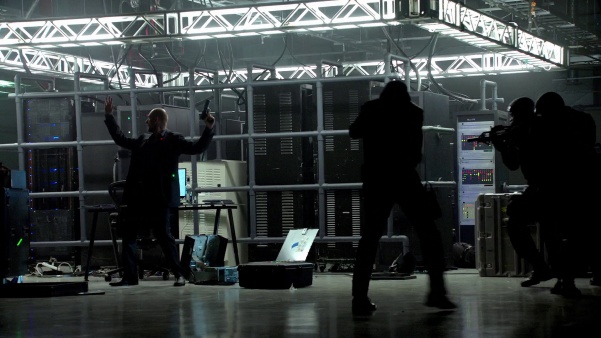 In "Skin", an Albanian criminal birefly wields a large-frame pistol, that is apparently reverse two-tone.

Pretty sure it's the same Zigana used in the beginning of the episode. I can make out the trigger guard and the some parts of the frame. Ominae (talk) 03:03, 11 December 2013 (EST)

Looks like an M4 pattern, however you can see that the receiver rail is higher than the handguard rail, and on a real M4 they would be in line. Based on this and the fact that this is a Vancouver production I would guess that this is one of the early model Olympic Arms K3B-FTs that appear in a lot of Canadian shows, like the Stargate franchise. --commando552 (talk) 06:30, 10 December 2013 (EST)

I'm not sure those are airsoft, I think they are just fitted with airsoft accessories. Firstly, they may have that hopper on the back but they also have a normal P90 magazine, which I do not thing can normally be fitted with one of these place. Also I don't think it has the AR-15 mag well on the left side, so my guess is that they have just fitted the hopper part to alter the shape of the weapon to make it appear futuristic. Secondly, after Kennex gets his leg shot off at the start of the episode, it looks like there are a number of cases on the floor which to me look like they could be fired 5.7x28mm crimped blanks (best shot is when it zooms in on the dead cops face). It could just be set dressing, but it got me wondering. --commando552 (talk) 08:58, 19 November 2013 (EST)

Irby's character picks one up from a disabled android near the end of first ep, and fires it. So obviusly not airsoft. Unless of course it was cgi, but doubtfull, I think those airsoft versions are discontinued. So it would be much easier to modify actual P90's not get a bunch of no longer for sale airsoft guns --Iceman (talk) 08:21, 12 December 2013 (EST)

Those airsoft guns are very much for sale: http://www.evike.com/product_info.php?products_id=30825
It would be possible to definitely identify them as airsoft guns if a view of the left side of the gun is available; the Evike Terminator uses a STANAG-style box magazine inserted into a magwell jutting out from the left side of the receiver, as the pictures show. I'm willing to bet that those guns are just slightly dressed up Evike Terminators with CGI muzzle flash. Chitoryu12 (talk) 01:18, 13 December 2013 (EST)

Looks like the same pistol that was in Stargate Universe. It is currently listed as a custom SVI 1911 but am fairly sure that is wrong as I think you can see a Beretta style slide through the ejection port, however it is different to the original Timecop Beretta. --commando552 (talk) 12:05, 19 November 2013 (EST)

That's exatcly what I was thinking; The first shot where Urban holds the pistol you can make out a frame-mounted safety... --Warejaws (talk) 12:13, 19 November 2013 (EST)

Here is a good comparison shot between the two: 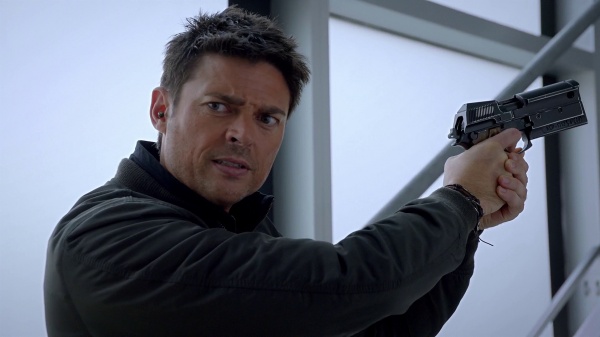 They are both Tauruses, but the only "custom" part that appears to be common is the rear part of the shroud that reciprocates with the slide. Both halves of the shroud at the front appear to be new, and even the grips are different being wood rather than polymer. --commando552 (talk) 15:17, 26 November 2013 (EST)

On a side note, does anyone know why Urban's gun handling has appeared to of worsened. He has always used good high grips on his handguns, and in the beginning of the series, but now he has adopted the cup and saucer technique, it just kind of confuses me.--One shot is all it takes. (talk) 20:02, 28 December 2014 (EST)

that is a decent possibility. It just bugs me because he uses a proper high grip on it in the first episode he gets it, but after that he starts teacupping it, perhaps it just felt more natural to him.--One shot is all it takes. (talk) 06:07, 29 December 2014 (EST) 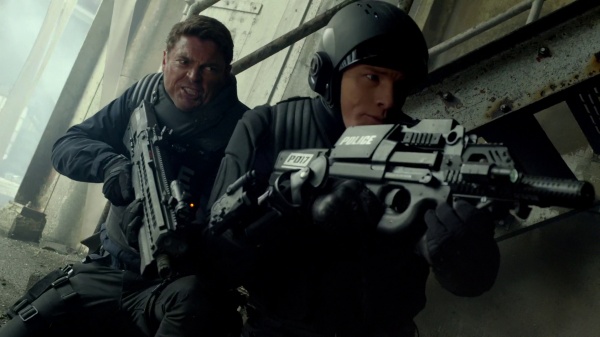 Tube selector looks like it's a straight tab rather than a hook.

Odd thing is, this one looks like a Gen 1, so maybe they had several. 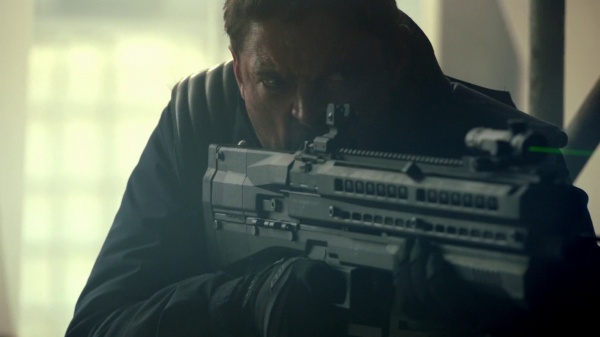 Given FPS Russia managed to break two of the three the manufacturer gave him, that wouldn't surprise me. Looks like they managed to break the dust covers on this one / both of these. Evil Tim (talk) 16:23, 26 November 2013 (EST)

Although the selector tab on that looks hooked (and may in fact be a Gen 1 one), I think overall it is a Gen 2. Firstly, it has the Gen 2 style catch on the loading port cover. Secondly, from the length of the first line of text it says "RIGHT MAGAZINE CAPACITY" rather than the Gen 1 which says "MAGAZINE CAPACITY". Lastly, the markings for the laser/light switch (although the switch isn't installed) are level with the front of the trigger guard rather than further back like on the Gen 1. --commando552 (talk) 19:56, 26 November 2013 (EST)