Again, I am seriously thinking about deleting this page cause I see no mentioning of these weapons being dressed up from real guns or just props meant to appear like they are shooting something. Excalibur01 11:06, 19 May 2009 (UTC)

I restored this page, because I do recall reading from a British Cinema journal that some of the sci fi weapons were built around real guns and the shapes were really hidden well by the outlandish decorative shells. I don't have the exact details, but will make it a task to research which guns were used as the basis for the sci fi weapons. This page is weak, I admit, but I hope to get better images and information on the weapons used. MoviePropMaster2008 08:23, 22 May 2009 (UTC)

I googled up a prop page ( http://www.yourprops.com/view_item.php?movie_prop=8662 ) which claims the rifles are all prop; essentially jury-rigged electrically operated revolvers using pyro charges inside a machined aluminium frame; similarity, the pistols are apparently resin kits and the grenade launcher another prop with a spring-loaded pump, machined aluminium reciever and a metal barrel. One wonders how much the phrase "non-gun technology" has to do with the presence of a certain miss Weaver on the same set as a bunch of icky weapons. Tim 23:11, 28 June 2009 (UTC)

Thanks so much! :D So these sci fi weapons were 'nonguns' like the ones we list from ISS. The more Info we can get the better. I still don't believe in deleting this page, being that the guns can still cause some confusion as to what they are. It's not like "South Park" (a page that was recently deleted) where no one in their right mind would wonder if any real guns were used or were the basis for the sci fi weapons. If it can answer someone's movie trivia question, then it belongs here. Also pretty funny with 'anti gun' Sigourney Weaver. She used a FULL AUTO gun and kicked ass in Aliens and then became all politically correct, thus the requirement that there by NO GUNS in Aliens 3. Since they are NON-Guns as listed in our fictional guns page, then we should try to educate the public. :) Again, thanks for the awesome info. MoviePropMaster2008 01:55, 29 June 2009 (UTC)

Well can we actually state in the article that they are nonguns? Cause I don't see anything on the page telling us that are not based on real guns Excalibur01

In the book on the making of Alien: Resurrection there are photos of the sleeve guns. They were made for the movie, the grips fold back so that they don't stick down, and the pistols can fit down the sleeves with no problems. When activated, the pistols pop out, and the grips swing down into position. David.

To basically 'float on nothing' until I can fix it. I may have access to some of the prop guns so I can take some real detailed photos of them, and I would like to post real sized screencaps. Again, I know enough people who are confused as to whether the weapons were real or not, to justify this page existing (if anything, to educate them). But I realize it is a very WEAK page. I will re-categorize it to not appear on the general list, so that I can work on it and not unveil it to the public until it is ready. Thanks everyone. MoviePropMaster2008 18:59, 6 May 2010 (UTC)

Well you did make a good argument and true be told, I've always been interested in the "guns" they used in this movie. Real detailed photos would be a step up for this page. Excalibur01

The best thing about this film's ballistics . . .

. . . isn't its guns or grenades, but the way Sigourney Weaver sinks that basketball into the net, standing near the three-point line, without even looking at the basket, with absolutely no special effects involved. That was a billion-to-one shot, as they say in the firearms world. --Mazryonh (talk) 19:32, 31 January 2015 (EST)

Apparently, while the Shock Rifle in the movie isn't based on a real gun, Malaysia has decided to base a real one on it: 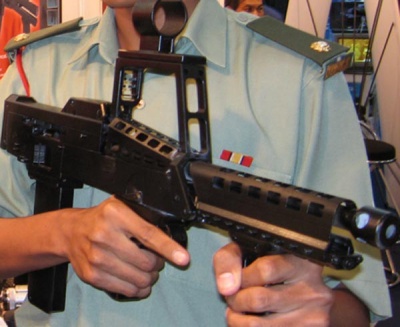