Coming along alright to me - Make the IDs and put some weapon thumbnails and I think that'll be most of it right there. That said the rifle does appear to be a Kar98k - The art/model of it looks rather similar to those of K98k's I've seen in other games. StanTheMan (talk) 15:21, 26 February 2016 (EST)

To me it looks more like a Remington 700 rather than a Mauser action. It doesn't have the Mauser style safety catch on the rear of the bolt, there is no clip guide, the ejection port is the wrong shape, and the bolt handle looks like the stock Rem 700 one. Comparing the top view to this schematic of a Remington 700 action you can see that it appears to be a match. --commando552 (talk) 17:07, 26 February 2016 (EST)

Looking at the pics of the game weapon again I concur it looks like a Remington bolt and action on the Hunting Rifle. I do think a 700 is the best ID that can be made on that one as it stands. The icon doesn't show much and more importantly means little if anything in regards to IDing the actual weapon. That being said the AK is definitely NOT an AKMSU whatever the icon shows, as the game weapon clearly has a full-length barrel. I'd actually go with listing it as an actual AK-47 as opposed to an AKM since it seems to lack the AKM-style slanted compensator. StanTheMan (talk) 01:25, 6 April 2016 (EDT)

I've changed the AK ID to an AKMS, as it has a stamped receiver, which you can tell by the magazine well dimples, rivets and ribbed top cover. I'm going for the folding S variant due to the icon, which doesn't show an AKMSU at all as it also has a standard length barrel. As for the compensator, this is a removable part so isn't a reliable form of ID. --commando552 (talk)

Fair points, I forgot about the ribbing being on stamped receivers. The icon looked to be a short-barrel gun, but I didn't look at it all that close TBH - Icons aren't necessarily good indicators to go on for the actual IDs most times I feel. StanTheMan (talk) 14:32, 6 April 2016 (EDT)

The Ribbing on the top cover of an AK is not necessarily indicative of the receiver type but it is an indicator. Depending on the specific gun you can put a ribbed stamped style top cover on a milled receiver, and there are some stamped guns (most notably the Norincos) which are stamped but with a smooth top cover. --commando552 (talk) 19:14, 6 April 2016 (EDT)

Ah, wasn't aware you could mix and match with the milled guns. To be fair though, I don't think that's something that's seen very much. Still good to know though. StanTheMan (talk) 02:46, 7 April 2016 (EDT)

Here's the best shot I could do of the AK in question (It's near impossible to drop the guns without them sticking out of the ground)--SeanWolf (talk) 16:41, 6 April 2016 (EDT) 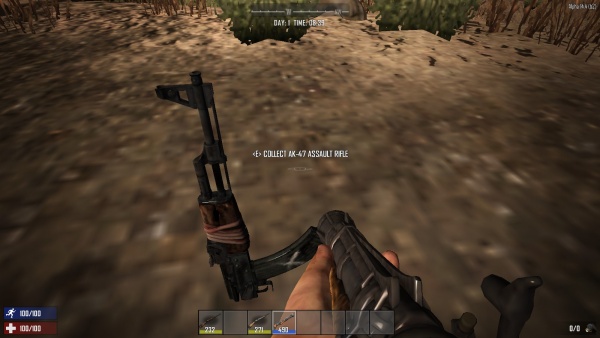 Hmm, unfortunately that complicates it more. It definitely shows it as having a stamped receiver, however in this shot you can see that it has the original AK-47 type front sight and gas block, and alas I can't think of a real variant that actually uses this arrangement of parts. --commando552 (talk) 19:14, 6 April 2016 (EDT)

OK, so here's the best shot I can get of the receiver of the rifle. Unfortuntaly, it is near impossible to drop guns in a way so one can look at them properly, due to them sticking straight up from the ground when dropped 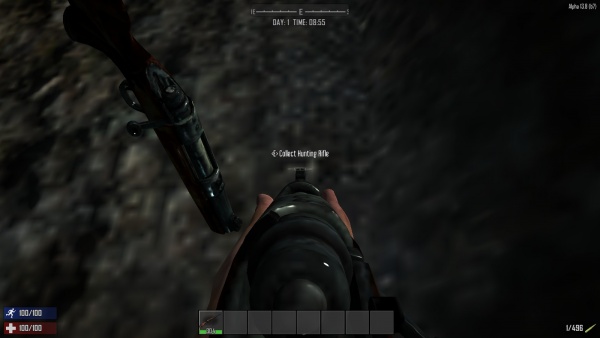 The receiver of the rifle. It does look like the one seen on a Mauser.

Images of all guns in the game

It should help to identify them. 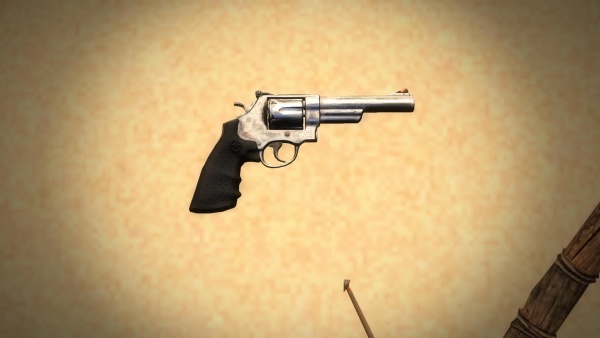 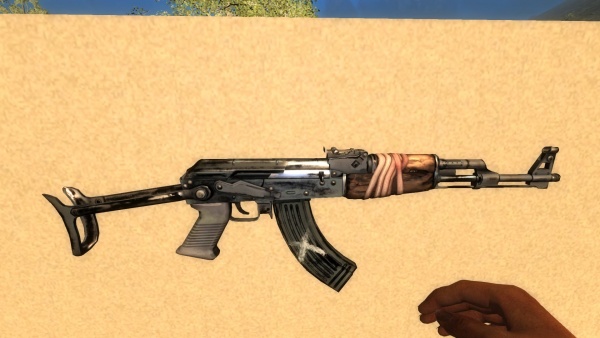 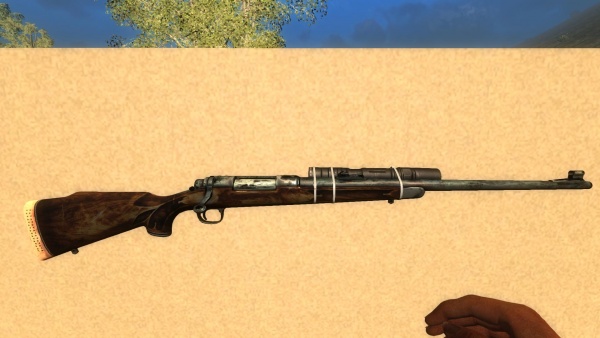 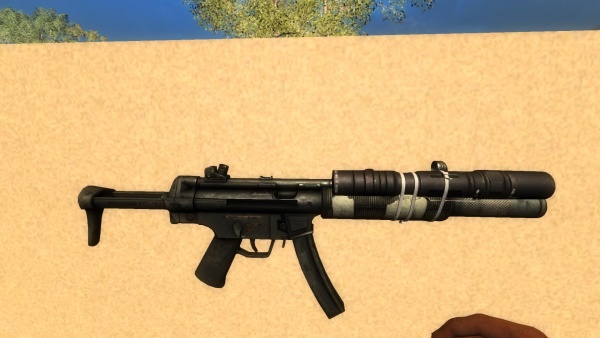 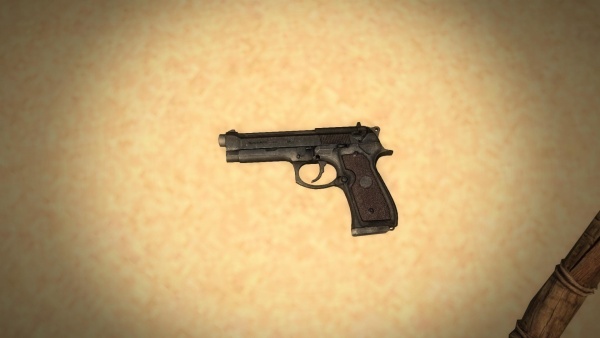 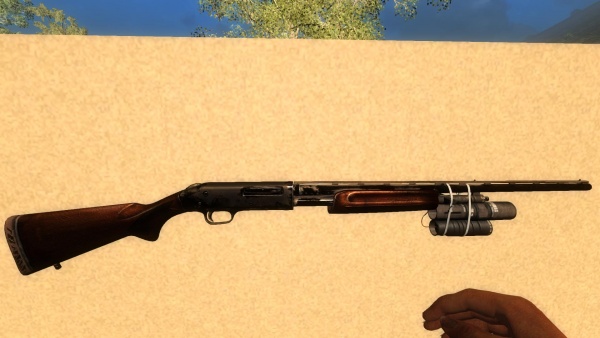 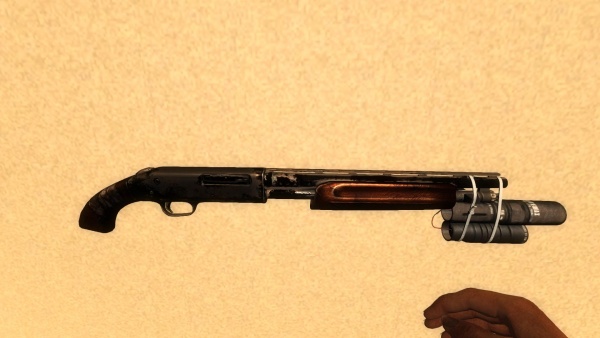 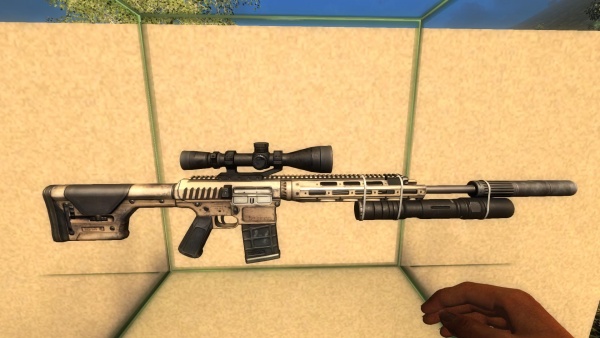 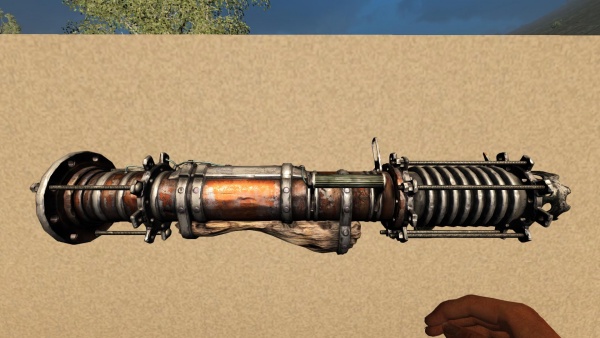 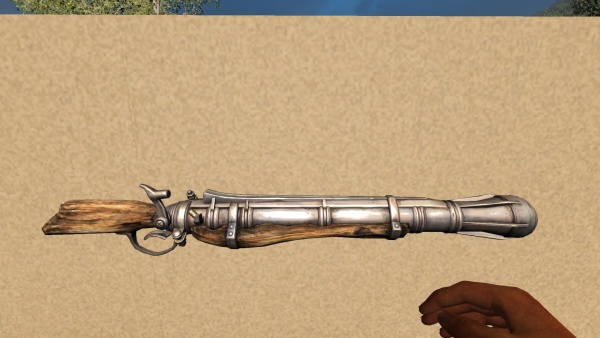 The pistol and the revolver were dropped on a drywall block -- nothing special. As for the rest, those are custom blocks, just hanging from other blocks -- notice the green thingy in the last image. BrianMcBrian (talk) 14:54, 5 May 2016 (EDT)

Only one that I disagree on is the semi auto sniper rifle, this is not an M110 but rather the RSASS that it is currently IDd as. As for that damn AK, it would definitely fall under the blanket of the AKMS but there are some weird parts in it. The grip is not so strange, I think that this is just an aftermarket Tapco "SAW" grip. The weird part is the it uses an AK 47 type front sight, gas block and gas tube, and I can't think of a real production gun that does this. It could be that the artist just combined parts from different guns, it could be based on a picture of a custom build that used parts from different guns, or maybe it is some odd variant that I am unaware of/forgetting. --commando552 (talk) 05:06, 7 May 2016 (EDT)

Added "Rocket Launcher" and "Blunderbuss". Thanks for ID-ing them. As for the AKMS, I call it in-game, just for fun, AKMF -- "The AKMF (F=Freedom) variant, intended for the U.S. market, was adapted for the 7.62×51mm NATO cartridges." Also, what about the Remington M700 description: "This is the Model 700 SPS (Special Purpose Synthetic) variant used for varmint hunting."? And finally, can MP5SD6 use 10mm Auto cartridges? BrianMcBrian (talk) 07:38, 7 May 2016 (EDT)

I agree about the RSASS. I also agree it's strange to see the taller AK-47 sight and tube there though, but as you said it could just be taking liberties with the gun model, or even a model of someone who took some liberties on an AK build, either way. I think it's best to stick with it as an AKMS and just note the differing pieces as we do. On the Remington, again, it appears more to be a BDL variant. As for the MP5 - All standard models are all 9x19mm. There are definitely 10mm conversions though, but they have straight magazines (see here). Finally, the rocket launcher has a bit of an M136 AT4 look to it, but I'm not sure I'd ID it as such. StanTheMan (talk) 19:10, 7 May 2016 (EDT)

It was supposed to be a funny reference to varmints in the game, ie. zombies, but I failed. :(
I visited the official Remington site and checked all the Model 700 variants they have there, so I don't doubt that the BDL is the closest one. BrianMcBrian (talk) 08:49, 8 May 2016 (EDT)