Look. It's not the MP40. It's the MP38, because this SMG has longitudinal grooving on the receiver

In this movie used MP38 and MP40 SMGs. Note the difference :)

MP38. longitudinal grooving on the receiver and hole in magazine receiver 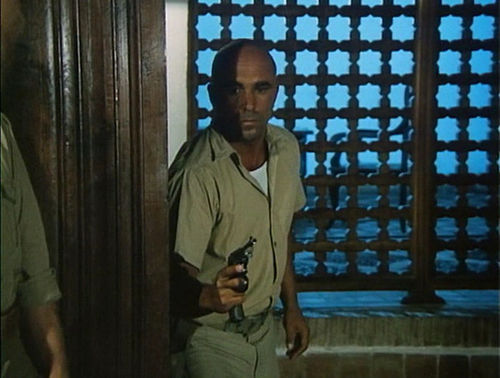 One of the men guardians the Hradec wore the holster at the waist with a long-barreled revolver.

Thank you so much. Pavel Blaha says in this scene: "SIG rifles are a good brand, but a real expert would selected this "Mauser" and picks up the rifle. Perhaps it is the Mannlicher.--Pandolfini (talk) 11:51, 17 September 2012 (EDT)

I almost posted a message here to pre-emptively state that it wasn't a Schoenauer, as I suspected that someone would think it was based on the matching muzzle and full length stock. Look at the bolt handle, it is in the wrong place for a Schoenauer. I think it might be a Mauser 98 Sporter in a Mannlicher stock, but am not sure. --commando552 (talk) 12:10, 17 September 2012 (EDT)

I think there are actually 3 different rifles being used here. On the first (episode 5) the rear of the bolt is a plain cylinder, the second (scoped) has the back of the bolt being typical of a Mauser 98, and the third (episode 10) has a much larger front sight and a more pronounced rear sight along with the whole of the action being generally chunkier. I think the first rifle could possibly be a BRNO Model 22F (barrel band is wrong for the reference pictures but this might vary), but the other two are not. --commando552 (talk) 14:14, 17 September 2012 (EDT)

Just flicked through the episode, and will agree that the rifles used by the workers outside the factory are definitely BRNO Model 22Fs, there are closer shots showing the second setting trigger and the matching barrel profile. However, the scoped rifle used by the guy to shoot the pine cones (I have absolutely no idea what peoples names are as I speak no Czech) is definitely not one. It has a Mauser bolt, a slightly different rear sight and it lacks the setting trigger. I don't know what I don't think it is a BRNO, my guess is some kind of Mauser in a Mannlicher stock. --commando552 (talk) 16:27, 17 September 2012 (EDT)

You are watched a movie on youtube?? (You know that shoot a pine cones). No, Czech filmmakers have had limited arsenal, using only one and the same rifle, just various disguises. Take note - from 1945 to 1975 and still appeared here pistol CZ 27! But in really our cops had since the 60 pistol CZ 50 and in 1975 already CZ 70. Sometimes it seems therefore that the StB (State political police who oversaw this movie) had fear entrust actors newer weapons in hand :)))--Pandolfini (talk) 19:48, 17 September 2012 (EDT)

Yeah, youtube, there are full episodes on there, just search for the Czech episode titles and they come up. With the scoped rifle, there is no possible way it can be a BRNO Model 22F, there are too many differences: the rear of the bolt is a Mauser 98 type not a BRNO, the bolt handle is slightly further forward, it has a simpler trigger guard, it lacks the second trigger, and the front sight is too short. There is no way you can make all these changes by dressing a rifle up (and why would you bother when in passing it looks very similar), it must be a different rifle. Could still be a BRNO of some sort or another Czech rifle, but it definitely isn't a Model 22F. --commando552 (talk) 20:21, 17 September 2012 (EDT) 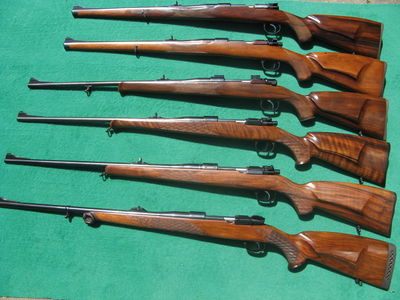 It isn't a CZ 455 as that has the smaller ejection port, but it could be one of the two upper Brno 98 rifles. Note how the shape of the rear of the bolt matches the scoped rifle, and also the slight curvature of the top of the butt is a match. They also have the matching simpler trigger guard without the second trigger. --commando552 (talk) 04:14, 18 September 2012 (EDT)

Here is!Well that was a model BRNO 22F. It is only later adapted version of 1959, where he was a different trigger guard and trigger simple, nothing more behind it is not.--Pandolfini (talk) 13:59, 18 September 2012 (EDT) 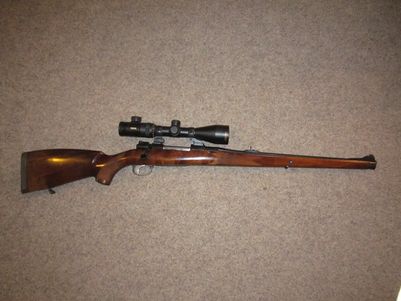 It might be this or a relative as the bolt and receiver shape match, and it has the simpler trigger guard and single trigger, but the bolt handle is different and it doesn't have the metal band over the top of the barrel in line with the front sling loop. --commando552 (talk) 15:09, 18 September 2012 (EDT) 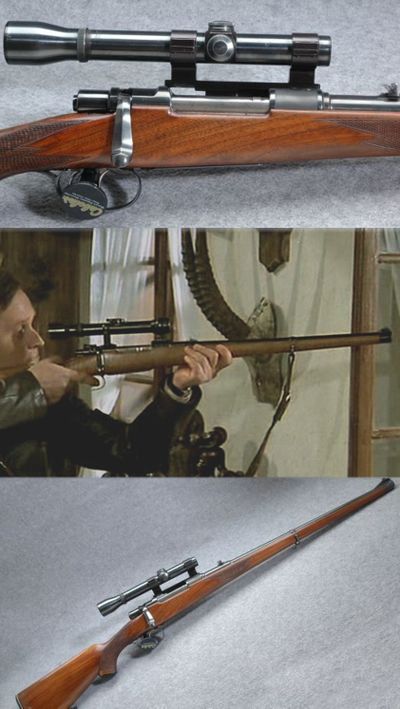 This rifle isn't a match as it has the wrong bolt, double triggers with the more complicated guard, and the receiver is the wrong shape (the scope rings are not mounted directly to it but on a side mount). --commando552 (talk) 15:09, 18 September 2012 (EDT)If there is anything else, it is not visible. The owner could have anything to add or subtract to order, he can not presented for the guest a serial piece:)--Pandolfini (talk) 01:50, 16 October 2012 (EDT)

Afraid not. The Mannlicher-Schönauer bolt is totally different, with the bolt handle being further forward at the rear of the ejection port. --commando552 (talk) 14:54, 23 May 2013 (EDT) 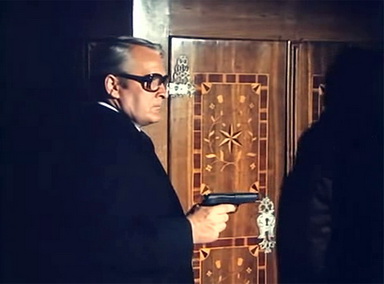 Their are NOT brothers, how did that come from? :) What do not you understand? Jula and Ed are two brothers. And helps them mate younger brother - a medical student. Their prototype is a group of brothers Masín. In the series, the older brother said the younger, "We must avenge the father, who dead, because he cursed the Germans." who said that? jula is saying to eda (33:40) - "remember YOUR father,their bring him to gallows,but after the war,when the all german coward system collapsed" masin bros are just the inspiration,not a true plot,just like the others stories of the whole serie. It is clear that the only inspiration. In the series, shoot each other přeci. However is a "brotherhood" as " the cat's paws", as we say in our country. Thus, the term "younger brother" is absolutely right :)--Pandolfini (talk) 03:17, 18 December 2012 (EST) and what exactly is your country? The same from there fled Masíns :)--Pandolfini (talk) 10:11, 18 December 2012 (EST)

Fanta by the term "flintůvka" did not mean a rifle, but a factory, Zbrojovka Brno. If he wanted to call a rifle like that, he would use, for example, "flintička", puštička". "Flintůvka = fabrika na flinty"