They all look like Gen 3 Glocks to me. *EDIT* I stand corrected the one in close up is a Gen 4 one, or at least the slide is anyway. I thought the Gen 4 Glocks had different serrations in the slide but after using some of my googlemagic I have discovered that they have the same serrations as previous generations. --cool-breeze 09:20, 4 November 2011 (CDT)

The four barrel derringer used in the first car chase was a COP .357, and there was a MP5K PDW used in the final chase. There was a two toned Desert Eagle and I THINK there was S&W 500 with either a 102 or 165mm barrel used by one of the biker guys in the hotel scene. 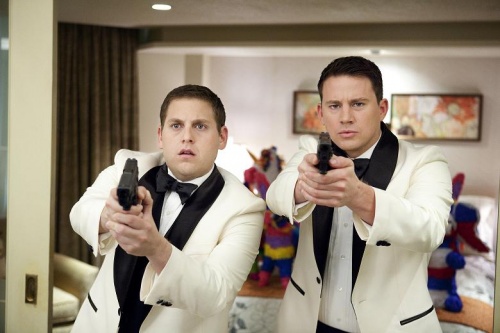 And just for the sake of completion...

Jenko wakes up Schmidt with a cap gun.

This one is definitely a Gen 4:

Although the slide markings aren't visible, the tip of the guide rod is the distinguishing feature. However, some of the other Glocks in the movie do not appear to be Gen 4 models:

How do we know that the MP5K-PDW isn't just a regular MP5K since with the stock of the PDW removed it would basically be a regular MP5K.