From Internet Movie Firearms Database - Guns in Movies, TV and Video Games
(Redirected from Spiral: From the Book of Saw)
Jump to navigation Jump to search

After finding the mauled corpse of a police detective in the subway, the police are forced to confront and stop a Jigsaw copycat killer who hunts cops only. The original creators of the series, James Wan and Leigh Whannell, as well as Rock and series veteran Kevin Greutert, serve as executive producers. Originally scheduled to be released in May 2020, Spiral was delayed due to the COVID-19 pandemic, and was released in the United States on May 14, 2021, by Lionsgate.

The following weapons were used in the film Spiral:

After murdering witness Charlie Emmerson (Frank Licari) in a flashback, Officer Peter Dunleavy (Patrick McManus) puts a Beretta 92FS in his hand to make it look like an attack.

Charlie's dead body with a pistol planted in his hands. 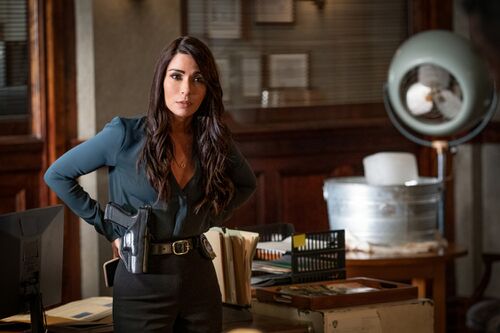 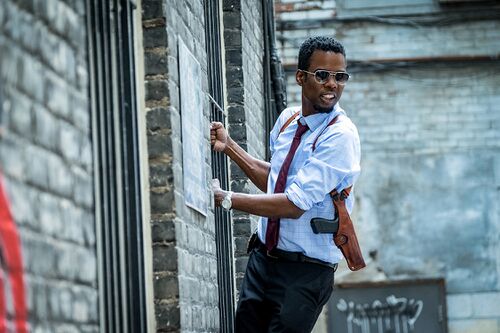 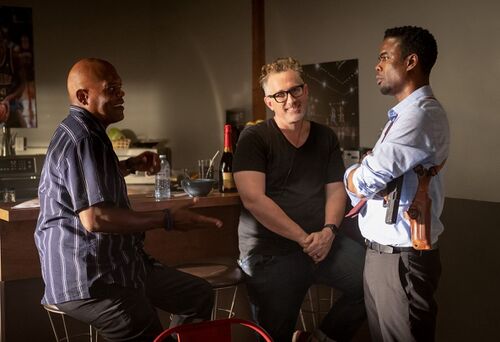 Behind the scenes photo of Samuel L. Jackson, director Darren Lynn Bousman and Chris Rock with a Glock 17.

In the opening scene, Boz (Dan Petronijevic) opens the sewer manhole where the purse thief has hidden.

When the gun comes into the light of a flashlight, the smooth underbar with no accessory rail is clearly visible.

Detective William Schenk (Max Minghella) passes with a gun holstered in the background.

Back at the police station, Zeke receives an unknown package brought by Officer Jeannie Lewis (Ali Johnson). She, like all officers, has a gun in her holster.

Detective Zeke Banks (Chris Rock) comes out with a gun into the kitchen where his father sits.

Fitch (Richard Zeppieri) inspects the new weapon and hides it under his jacket.

He later briefly holds the gun at an abandoned bread factory when he searches for junkie Benny Wrights.

The tape shows Officer Fitch in the past killing a civilian for no reason.

A close-up of the gun during the preparation for the robbery.

Zeke blows out the door lock with a gunshot.

Getting into the room, he threatens the junkie with a gun while the others steal cocaine and cash.

A team of police officers arrest the robbers by blocking their way and pointing guns at them. The officer in the background uses an obvious replica with welded barrel due to the proximity of the gun to the other officers.

Officers force the criminals to surrender.

-Zeke, Is that you?
Officer Pat Jones (Trevor Gretzky) recognizes a colleague among the robbers.

Officer Grant (Nadine Roden) points the way to the crime scene for the detectives.

Zeke approaches the New Jigsaw marked car with the gun.

He slowly opens the door.

In the flashback, Zeke hides around a corner chasing a criminal.

One of the robbers (Howard Green) carries a SIG-Sauer P226R as a sidearm, but never uses it.

The robber's gun lies on the table as the gang prepares to rob the motel room.

He loads the gun and puts it away.

One of the robbers (Donavan Boucher) loads and later uses a SIG-Sauer P239 during the motel robbery. 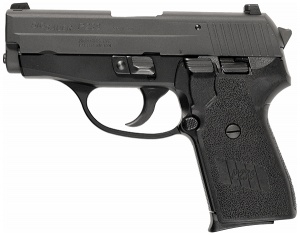 A robber loads a magazine into a pistol.

He discusses a Forrest Gump with Zeke.

A robber threatens a woman with a gun while she collects money in her backpack.

Retired police chief Marcus Banks (Samuel L. Jackson) uses a Smith & Wesson Model 19 revolver as his primary weapon throughout the film. He brings it with him to visit his son Zeke, revealing when Zeke mistakenly aims it at him. In the flashback, Chief Marcus raises his gun, threatening whoever didn't help Zeke. 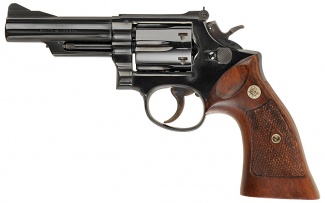 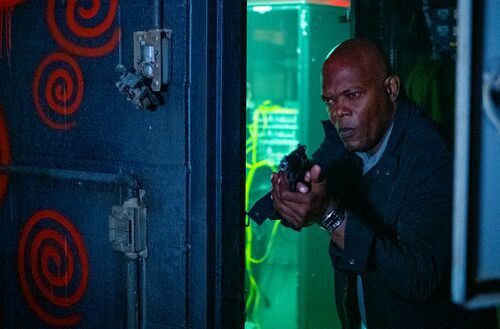 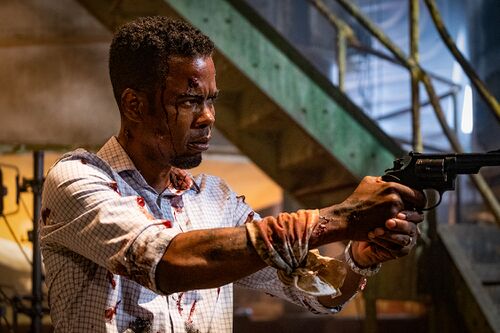 Banks pulls out his revolver.

-I'm going to call Dispatch and find out who was closest available, and when I do, I'm going to take this gun and shoot that motherf#cker.
Marcus tries to track down the officer who did not return his son's call.

-You wanna play a game, motherf#cker?

In the flashback, the criminal (Nick Alachiotis) fleeing from Zeke is armed with a Smith & Wesson 5946.

The man slowly approaches Zeke with a gun.

The criminal (Nick Alachiotis) raises the gun, giving a chance to take a closer look at it. Note the plugged hole instead of the decocker lever.

One of the robbers (Matthew Lee) uses a IMI Mini Uzi during the motel robbery.

The robber, who stands guard, points the gun at the disturbed residents, ordering them back into the room.

The side shot of the gun.

After a successful robbery, the crew leaves through the fire stairs. Note the folded stock.

He takes off his mask, holding the Mini Uzi.

One of the robbers (Howard Green) use a Mossberg 590 Compact Cruiser as the main gun during the robbery.

A man takes the shotgun up from the armchair.

He brings the gun to the table to load it. Note the magazine cap and the length of the barrel.

The shotgun lies on the couch next to the robber.

The crew goes down the stairs. The left one of them holds the gun.

What appears to be a Remington 870 shotguns are seen on the gun rack at the pawn shop.

Several barrels are visible on the gun rack.