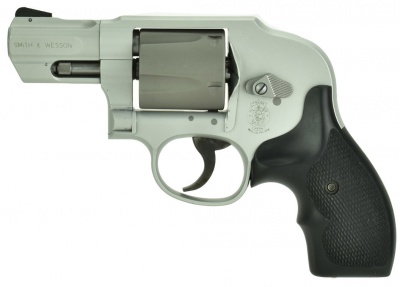 The Smith & Wesson Model 296 AirLite TI is a double action only revolver chambered in .44 Special. It is built on a scandium alloy "L" frame and has a titanium cylinder giving it a distinctive two-tone appearance. In outline it resembles a larger version of the Smith & Wesson Model 649, however whilst the Model 649 has a semi concealed hammer which can still be cocked for single action use, the hammer on the Model 296 is entirely internal. Due to its somewhat unusual (arguable ugly) appearance, niche caliber, and a relatively large size for its intended purpose as a concealed carry revolver, the Model 296 proved unpopular and hence it was discontinued after only 2 years of production.

The Smith & Wesson Model 296 AirLite TI and variants can be seen in the following films, television series, video games, and anime used by the following actors: