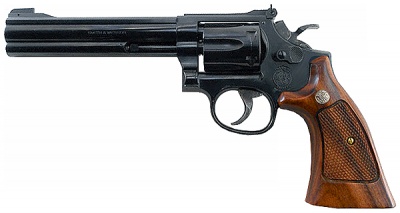 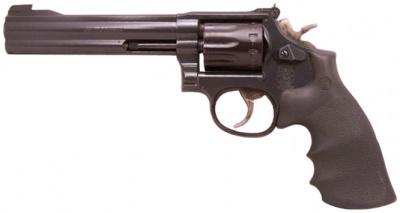 The Smith & Wesson Model 17 is a six-shot double-action revolver chambered for .22 LR. It is built on Smith & Wesson's medium-sized K-frame

Since the Model 17 is only chambered in .22 LR, it is not often used in films, except as an 'impersonator' of similar revolvers chambered for larger rounds. 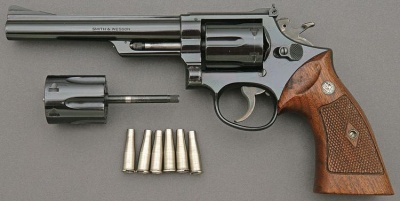 The Smith & Wesson Model 53 was introduced in 1961 in the .22 Jet caliber. It is a revolver of six round capacity built on the small K frame using a double action trigger. The Model 53 can also fire the .22 Short, Long, and Long rifle cartridges using chamber inserts. The hammer had a two position firing pin to allow it to be switched from rimfire to centerfire as needed. The handgun came with target handgrips and sights and in barrel lengths of 4, 6 and 8.3 inches.

In the late 1950s there was considerable interest in the shooting community for revolvers chambered in various .22 caliber wildcat cartridges. Smith & Wesson sought to take advantage of this by unveiling a cartridge known as the .22 Remington CFM (Centerfire Magnum) cartridge or the .22 Remington Jet and chambered a version of the Model 17 in this caliber designating it the Model 53.