Six Reasons Why is a 2008 post-apocalyptic Western film directed and produced by Matt and Jeff Campagna. The film is set in a post-apocalyptic future in which society has returned to a Wild West-like setting, and stars Daniel Wooster as a lone vigilante sent out into a desolate stretch of wilderness known as the Badlands by a preacher (Colm Feore), tasked with protecting a mysterious city beyond the desert from outsiders. Christopher Harrison portrays an orphaned young entrepreneur who, accompanied by his indentured servant (Mads Koudal), is tracking a murderous assassin across the Badlands.

The following guns were used in the film Six Reasons Why:

The Colt 1851 Navy is the most prominently featured sidearm in the film. The Nomad (Daniel Wooster) carries one that is blued and heavily engraved and features a silver star inlaid into its wooden grips. It also appears to have a steel grip frame rather than a brass one, making it a London model. The Entrepreneur (Christopher Harrison) also carries an 1851 Navy, particularly a standard model (with a brass grip frame) that is nickel plated and elaborately engraved, but fitted with checkered ivory grips. The Sherpa (Mads Koudal) also carries yet another engraved 1851 Navy, this one with a blued finish and some sort of wrap around the grips, later revealed to conceal a silver star inlay identical to The Nomad's revolver. The Preacher (Colm Feore) also appears to carry an ivory-handled 1851 Navy in his holster, though it is never clearly seen, drawn or fired.

The Nomad practices drawing and spinning his Colt 1851 Navy.

Close-up of The Nomad's decorative 1851 Navy. Note the lack of percussion caps. In reality, this would make the firearm useless.

In a flashback, The Preacher (Colm Feore) gives the decorative 1851 Navy to The Nomad as a child.

The Entrepreneur unlatches the safety strap on his holstered 1851 Navy as The Nomad approaches.

The Entrepreneur wipes blood off of his 1851 Navy's ivory grips after brutally pistol-whipping a man.

The Entrepreneur with his 1851 Navy at the ready.

The Sherpa fanning his 1851 Navy in the climactic gunfight.

.....and then lays it down, revealing it to be identical to The Nomad's pistol.

The Criminal (Jeff Campagna) carries a pair of brass-framed Colt 1860 Army revolvers. While these would be considered anachronistic for a true 19th century Old West setting, (as no original Colt 1860 Army revolvers were made with brass frames; only modern reproductions), this film is revealed to be set in a post-apocalyptic future society that merely resembles the Old West, so they can't necessarily be labeled as period incorrect in this case.

The Criminal points his Colt 1860 Army at The Nomad's horse.

The Criminal reveals his two 1860 Army revolvers concealed under his poncho.

The Criminal's hands hover over the grips of his revolvers.

In a continuity error, The Sherpa (Mads Koudal) is seen firing a nickel Single Action Army revolver in the climactic gunfight, the SAA replacing his 1851 Navy. The Nomad (Daniel Wooster) also appears to fire an SAA (possibly the same one) in yet another continuity error. This may have been intentional on the filmmakers' part, as the use of the SAA allowed them the use of blank cartridges, and these two occurrences are the only clear shots of a gun actually firing in the entire film (showing muzzle flash, etc.). A sleeping deputy in the saloon is also seen holding what appears to be an SAA.

The Sherpa fires the SAA. 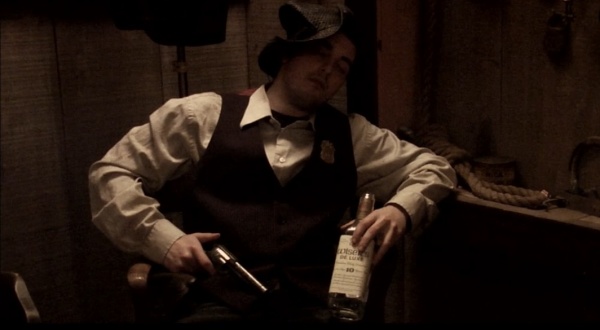 A sleeping deputy in the saloon clings to his SAA.

As a tribute to his iconic career in Western films, a poster of Clint Eastwood as Josey Wales from The Outlaw Josey Wales posing with his two Colt Walker revolvers is seen hanging on a wall in the saloon.

A poster featuring Clint Eastwood from his iconic Western movie The Outlaw Josey Wales wielding his signature Colt Walkers can be seen behind the saloon patron's head.

In addition to his 1851 Navy revolver, The Nomad (Daniel Wooster) also owns what seems to be some sort of flintlock rifle that appears to have had the barrel sawed down, as it lacks a front sight. It is only seen once, and he never actually fires it, only using it to subdue The Entrepreneur and The Sherpa.

The Nomad holding the rifle.

The Nomad with the rifle.
Retrieved from "https://www.imfdb.org/index.php?title=Six_Reasons_Why&oldid=1453390"
Categories: