The Ridiculous 6 is a 2015 Netflix original comedy western starring Adam Sandler as Tommy "White Knife" Stockburn, a blade-wielding outlaw who discovers that he actually has 5 half-brothers. Together, they travel throughout the Old West in search of their father. The film features appearances by several comedic actors including Rob Schneider, Will Forte, and Steve Zahn.

The following weapons were used in the film The Ridiculous 6:

The Single Action Army 7 1/2" Cavalry revolver is another sidearm seen in the film.

The revolver is wielded by Danny Stockburn (Luke Wilson). 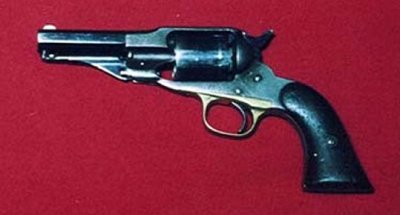 Some outlaws are armed with the Remington 1875.

The Remington revolver about to be shot out of the hand of an outlaw.

Some characters use Winchester Model 1873 rifles.

The Winchester rifle is held by Herm Stockburn (Jorge Garcia).

A guard armed with the "Yellow Boy" rifle.

In the center, the "Yellow Boy" rifle is held by Lil' Pete Stockburn (Taylor Lautner).
Retrieved from "https://www.imfdb.org/index.php?title=Ridiculous_6,_The&oldid=1064783"
Categories: