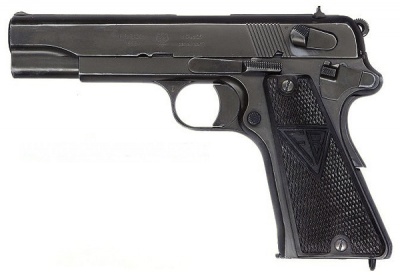 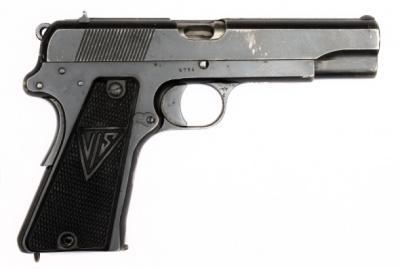 The Vis wz. 35 (Vis meanig "force" in Latin) is a high-end semiautomatic pistol developed and built by Poland prior to the years of World War II. Its designers, Piotr Wilniewczyc and Jan Skrzypinski, took their inspiration from John Moses Browning's M1911 pistol. In 1935, the pistol was adopted as a standard handgun in the Polish Army and sent to production in Fabryka Broni Radom - state armory in the city of Radom, Poland. After the German invasion in 1939, the Germans continued production of Vis pistols and issued it to their own troops, as the Pistole P35(p). They also decided to move barrel production to the Steyr plant in Austria, with plans to make whole pistols there, because Radom's workers were known to make guns for the Polish resistance.
In American and English sources, this pistol is known as Radom, mainly because of its place of birth. This moniker is not recognized by other European sources and most importantly, the Poles themselves, but it is so widespread that it became the pistol's de facto name and is listed in the title for search purposes.

The Vis wz. 35 Radom pistol and variants can be seen in the following films, television series, video games, and anime used by the following actors: