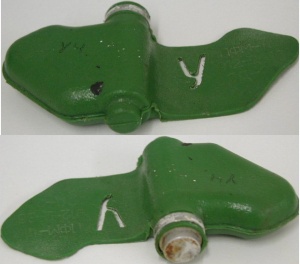 PFM-1 Lepestok landmine. This is a training sample.

The PFM-1 Lepestok (Protivopekhotnaya Fugasnaya Mina-1 Petal) is a Soviet anti-personnel land mine, nearly an exact copy of the US BLU-43/B Dragontooth. The first version, PFM-1, is currently removed from service, while the second version, the PFM-1S which features a self-destruct device, is still in service with the Russian Army.

The PFM-1 Lepestok and variants can be seen in the following films, television series, video games, and anime used by the following actors: