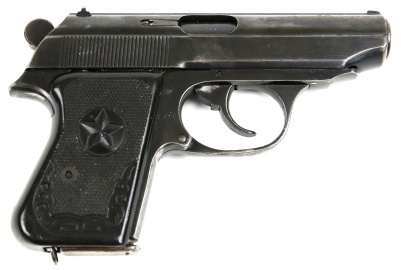 The Norinco Type 64 (Chinese: 64式手枪; Literally "Type 64 Handgun") was the first indigenous pistol design developed by the People's Republic of China. Based on the Type 52 (Walther PPK) and Type 59 (Makarov PM) pistols, the Type 64 pistol uses the Walther PPK's straight blowback, open bolt single-action system while incorporating the Makarov PM's safety system. The Type 64 is chambered in the unique 7.62x17mm round, which is similar in dimensions to the .32 ACP.

The Type 64 was designed between 1960 and 1964, but was not introduced into service until 1980. Initially issued to high-ranking People's Liberation Army officers and officials, the Type 64 has since been replaced in PLA service by the Norinco QSZ-92. However, it remains in use with the People's Armed Police and some civilian police forces alongside the Norinco NP-216 revolver. The Type 64 is still use with the plainclothes police in China for now.

The Norinco Type 64 Pistol and variants can be seen in the following films, television series, video games, and anime used by the following actors: