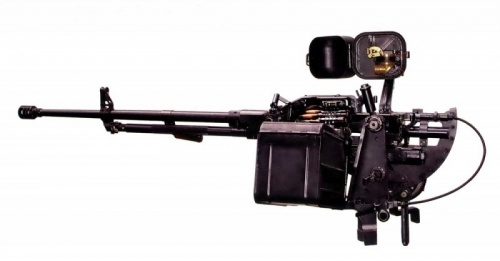 The QJC-88 (QJC is code for 轻武器—机枪—车载, Pinyin: Qīngwuqi Jīqiāng Chēzài, meaning Light weapon, machine gun, vehicle mounted) is a Chinese vehicle-mounted heavy machine gun designed by Norinco. It is a mounted variant of the W-85 heavy machine gun (not to be confused with the Type 85 heavy machine gun), with minor improvements compared to the W-85. It is currently in service as mounted machine guns on the Chinese Type 96 and Type 99 MBTs, as well as other PLA vehicles.

It is not to be confused with the Norinco QJY-88.

The Norinco QJC-88 and variants can be seen in the following films, television series, video games, and anime used by the following actors: