From Internet Movie Firearms Database - Guns in Movies, TV and Video Games
(Redirected from No One Lives Forever 2: A Spy In HARM's Way)
Jump to navigation Jump to search 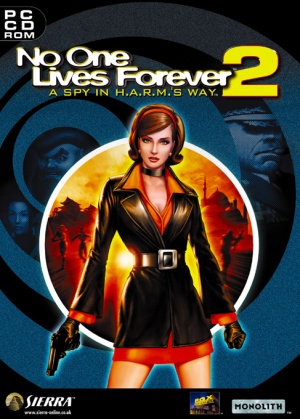 The following weapons appear in the game No One Lives Forever 2: A Spy In H.A.R.M.'s Way:

Cate's main gun is the .32 ACP Beretta 82FS "Cheetah", known as "McAllister handgun" in the game. It is available with or without a suppressor, and can fire FMJ and Cyanide rounds.

This is quite anachronistic for the year the game takes place in. Beretta 81 first became available in 1976, with the 82FS variation becoming available around late 80s or 90s. Presumably the game designers may have confused the Beretta Cheetah to a Beretta Model 70 - which was introduced in 1958 and commonly appeared in 60s spy fiction works. 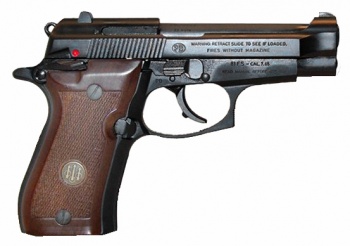 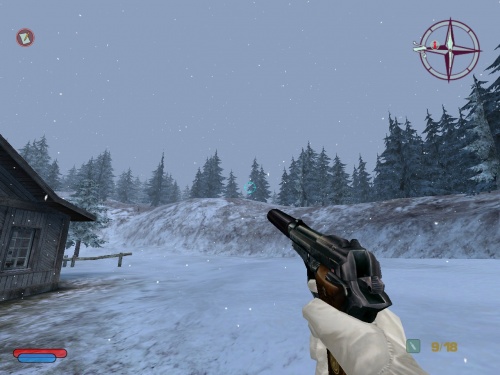 The 82FS in the game, portrayed with extractor on the wrong side. 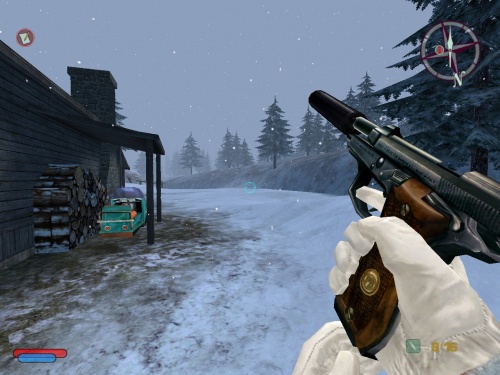 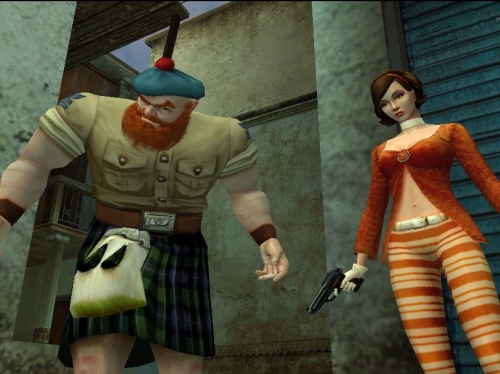 Cate holds a non-suppressed 82FS pistol in a cut-scene. 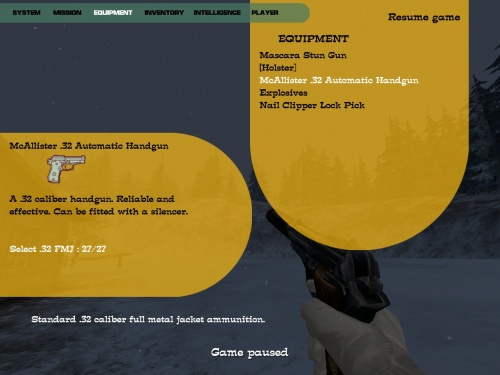 The sawed-off Ithaca 37 appears as the "Bacalov Instigator Combat Shotgun" in the game. It fires both 12 Gauge and explosive shells. 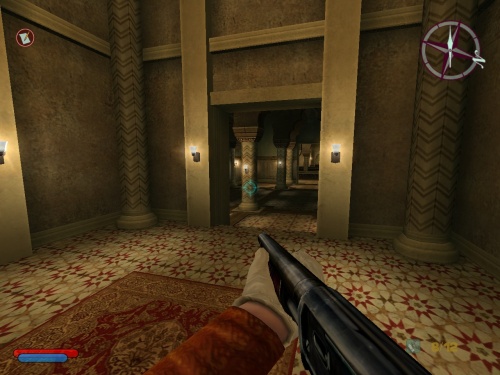 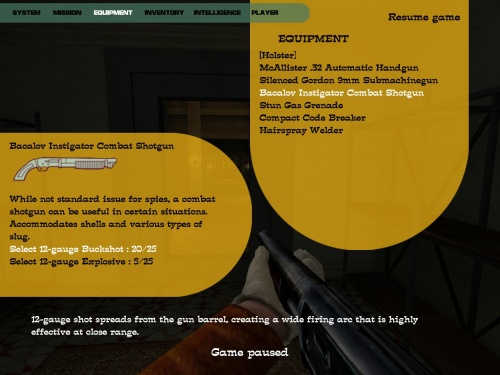 H.A.R.M's main sub machine gun is the 9mm Sterling L2A3. As in the previous game, it is known as the "Gordon SMG". Holds only 30 rounds instead of the correct 34. 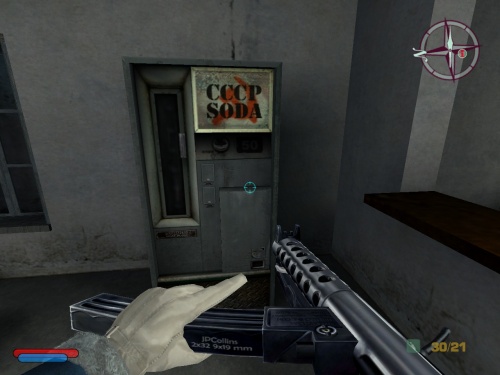 Cate with an L2A3 submachine gun. 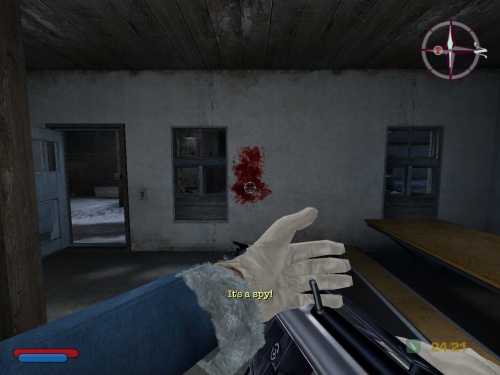 Cate pulls the charging handle of the L2A3 SMG. 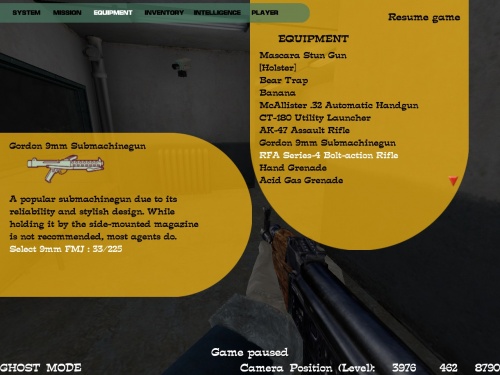 In-game description of the weapon, with some helpful advice.

For stealthier missions there is also a version of the Sterling SMG with internal silencer available. Called the "Silenced Gordon SMG" in the game. Holds only 30 rounds instead of the correct 34. 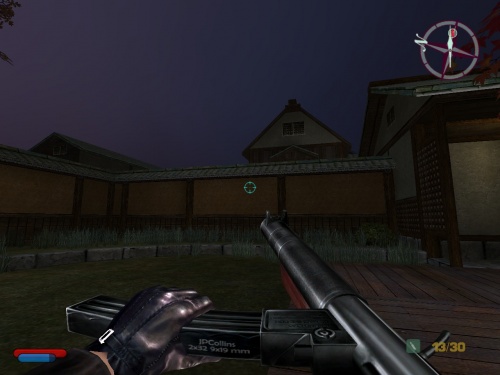 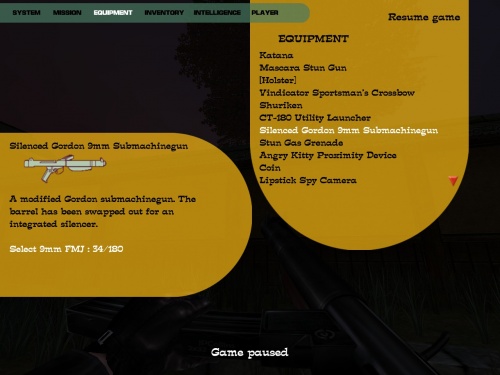 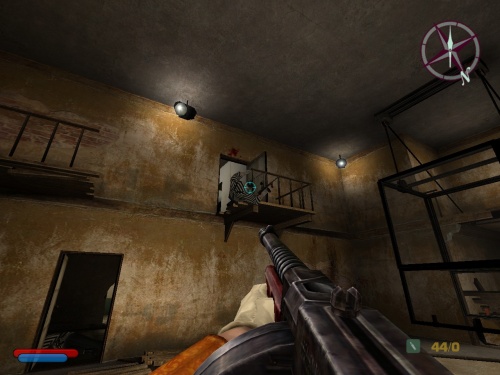 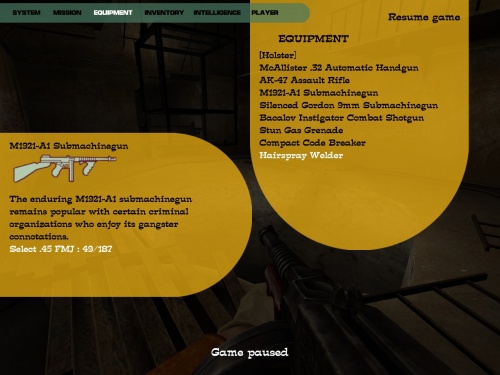 Soviet soldiers are armed with AK-47 during the game. The guns are hybrids and have AKM stamped receivers but smooth AK dustcovers. Also found in many other places during the game. 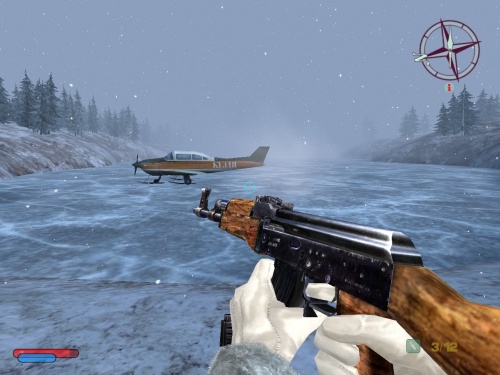 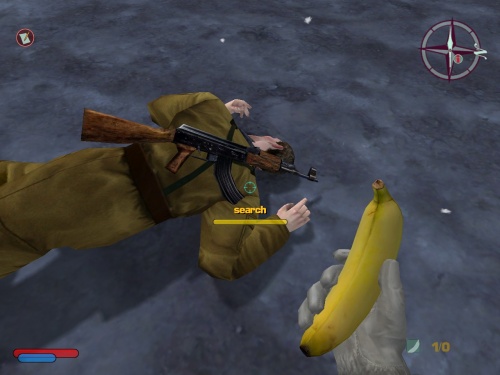 A dead communist soldier with an AK on his back. Anyone hungry? 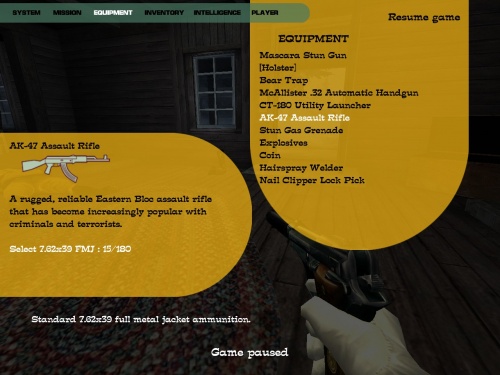 The Steyr SSG 69 PII is known in the game as the "RFA Series-4 Bolt Action Rifle". The rifle is modeled with a slightly shorter barrel than the real life SSG 69 PII. Is available with and without a suppressor. This gun is anachronistic, as it was not available in the 1960s. 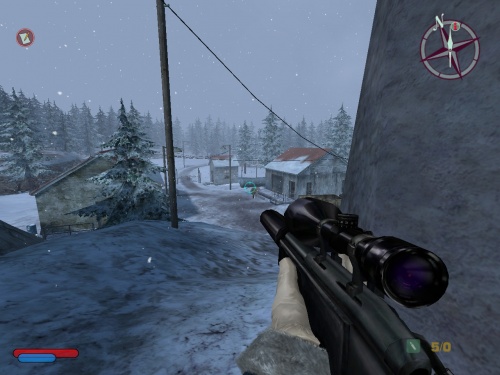 Cate holds an SSG 69 PII fitted with a sound suppressor. 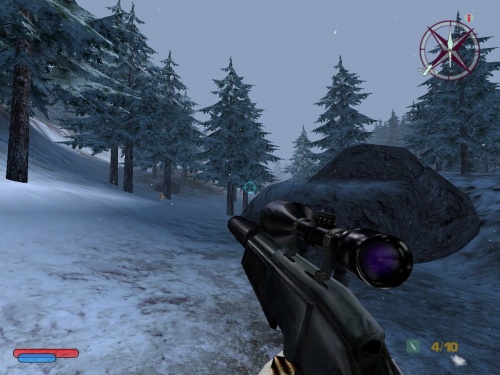 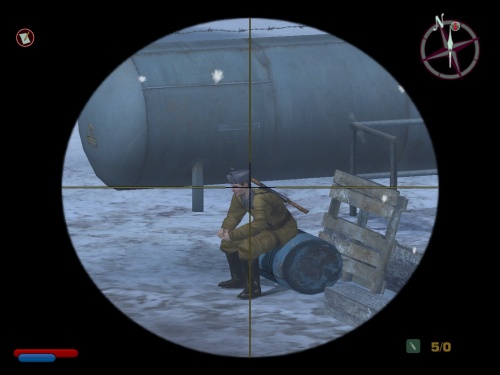 View of the reticle of the SSG 69 PII, providing 4x zooming level. 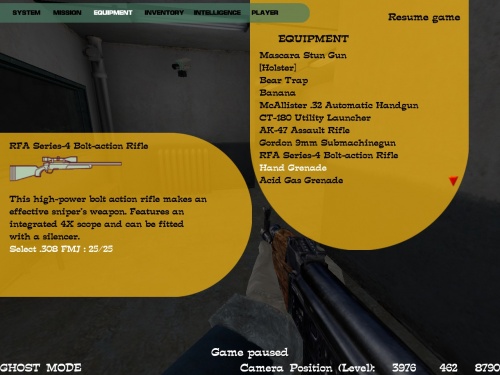 The Mills Bomb is known as "Hand Grenade" in the game. 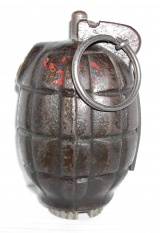 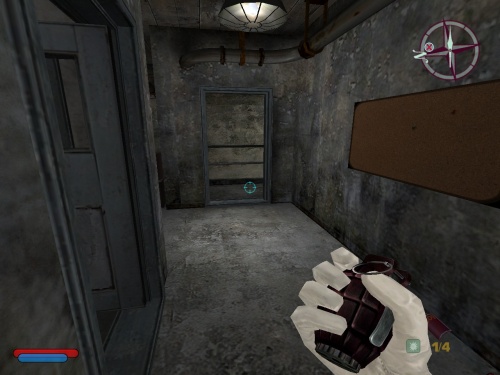 The MK3A2 offensive grenade is portrayed as an acid grenade, that can silently kill groups of enemies. 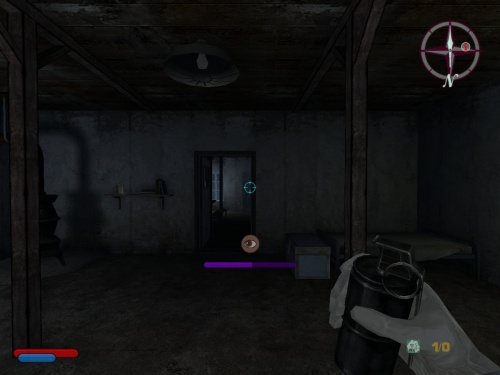 Flashbang grenade of unknown make, that can blind and stun enemies. 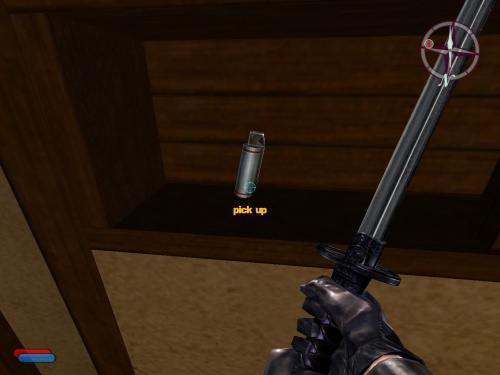 A flashbang grenade in the game. 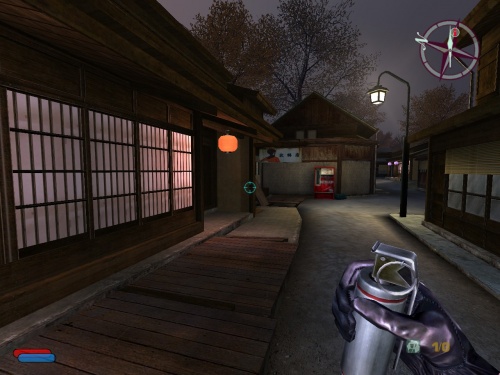 Can knock out groups of enemies silently. 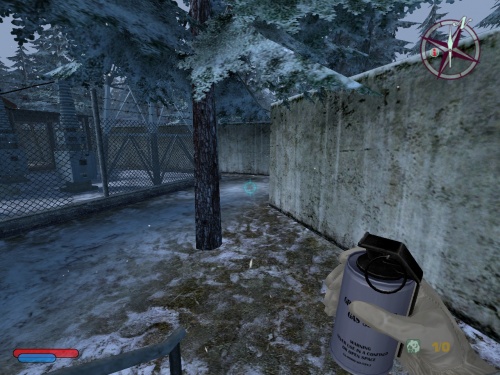 Well, the name tells everything. 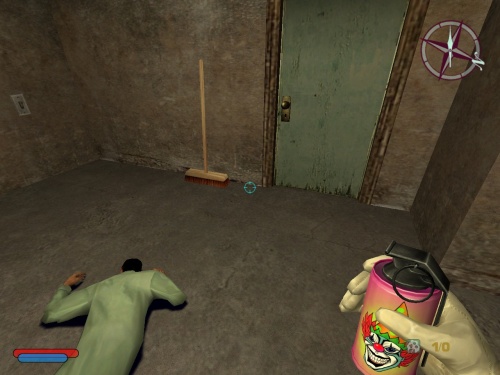 Dynamite charges can only be planted at predefined locations. 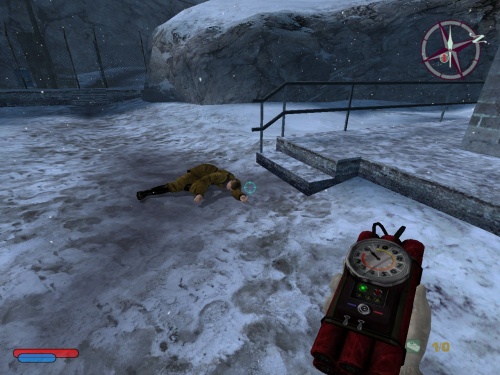