The following weapons were used in the film The Millionairess: 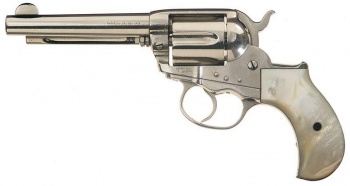 Colt Lightning, similar to the one used by Val Kilmer in Tombstone, with a full-length ejector rod housing.

Colt Lightning holds Epifania's father in hand on a painting in his den.

Epifania (Sophia Loren) took the revolver from a drawer of her father's table ...

... and put it into her purse.
Retrieved from "https://www.imfdb.org/index.php?title=Millionairess,_The&oldid=928316"
Categories: