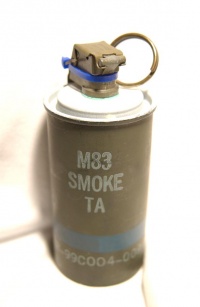 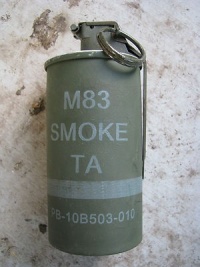 The M83 TA smoke grenade is a modern version of the AN/M8 HC smoke grenade, using the less toxic terephthalic acid (TA or TPA) filler instead of hexachloroethane-zinc (HC). It also features a new body, though it uses the same fuze as the AN/M8. Originally designed in the 1990s purely for use as a training grenade, it has since started to replace the AN/M8 in combat. In 2009, the word "training" was removed from its description in FM 3-23.30 ("Grenades and Pyrotechnic Signals").