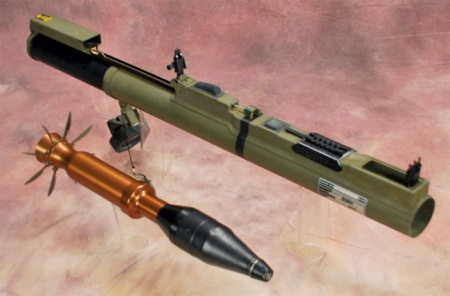 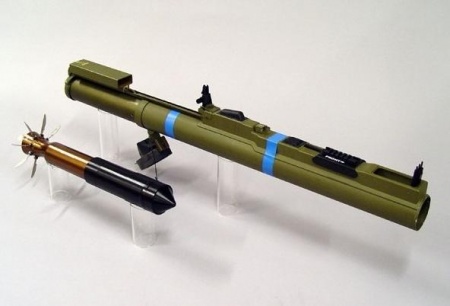 The M72 LAW is a lightweight, disposable unguided anti-tank weapon developed for individual use and first deployed during the Vietnam War. LAW either stands for "light antitank weapon" or "light anti-armor weapon:" the latter seems to be preferred in modern sources, as the weapon is no longer in any way suitable for attacking a main battle tank. A spent tube is relatively easy to get hold of since in many jurisdictions it is treated in the same way as an expended bullet casing. It would be incredibly unlikely to see a live LAW in a live-action medium outside of stock footage, due to the risk to actors. It can be assumed any LAW in a live-action movie is a spent tube, typically rigged with some sort of pyrotechnic device to simulate firing. One point of note is that the LAW has a grenade-like pin safety at the top of the rear cover which allows removal of the front and rear covers and the carry strap: this pin is often missing from spent tubes and so its removal is often also missing in media depictions. The original 60s model had a second arming safety pin at the rear, but this was deleted from later production models due to reports that it was readily possible to yank the pull-ring out of the pin and render the launcher useless.

LAWs in private collections and movie armories also typically have either no front sight or a non-factory replacement; this is because the original front sight used radioluminescent paint containing promethium-147, and troops were instructed to snap off the front sight for disposal by a radiation safety officer before discarding a spent tube. The "discarding" part ended fairly quickly in the Vietnam War as the Vietcong proved very fond of packing spent LAW casings with explosives for use as booby traps.

LAWs starting with the M72A4 no longer have this issue, as they do not use the illuminated ladder front sight, instead having a 3-prong front sight and aperture rear sight derived from those designed for the cancelled FGR-17 Viper rocket launcher and very similar to the sights of the M136 AT4. The modernized variant, the M72A7, incorporates a small picatinny rail behind the front sight to allow night optics or lasers to be mounted. The British military refers to an improved anti-bunker variant with a penetrating time-delay fuze and alterations including a lightweight carbon fiber bore liner and improved axial trigger as the "L72A9 LASM" (Light Anti-Structure Munition) or M72A9.

The M72 was regarded as obsolete as an anti-tank weapon by the 1980s, with the FGR-17 Viper rocket launcher developed to replace it briefly entering production before cost overruns and reports of static damage and dangerously faulty fuzes that could cause the rocket to explode on launching saw the entire program cancelled in 1983. Congress ordered the US Army to consider off-the-shelf replacements, and they ultimately chose the M136 AT4 over the M72E5 LAW that participated in the trials, while the Marines acquired a variant of the Israeli B-300 rocket launcher, the Mk 153 SMAW. However the LAW found a new lease of life in the urban combat and mountain warfare of Iraq and Afghanistan with the HE-DP M72A6 and M72A7 variants, with benefits including the ability to carry two LAWs for the weight of a single AT4.