M56 Smart Gun. This particular version is the one carried by Vasquez in the film. 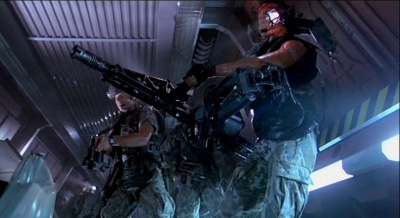 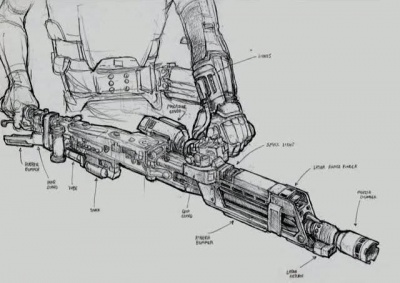 A pre-production sketch shows off the detailing of the weapon.

The M56 Smart Gun is an advanced weapon used by the colonial marines in the movie Aliens. Using electrical pulse action, it fires 500 10mm caseless high-explosive rounds at a rate of 1200 RPM. Despite the fact that the weapon weighs nearly 40 pounds, it can be easily carried and operated with the assistance of a servo-controlled harness. It is called a "smart gun" because the gun has its own guidance system, guided by infrared tracking systems on top of the gun's barrel and on a head-mounted goggle system, guided by a targeting processor in the harness. When a target is designated by the tracking system, the harness automatically guides the operator and gun to the target. Switching targets is as simple as pointing the gun's barrel at a new target. The gun can fire in a three round burst or in fully automatic.

The Smart Gun is a modified MG42 machine gun married to a Steadicam harness, with additional parts added from various motorcycles.

The M56 Smart Gun has appeared/been used in the following: