I Spit on Your Grave 2

The following weapons were used in the film I Spit on Your Grave 2:

Closeup on the Taser.

A Kahr K9 with blued controls is seen in the hands of Ivan Patov (Joe Absolum) near the end of the film. 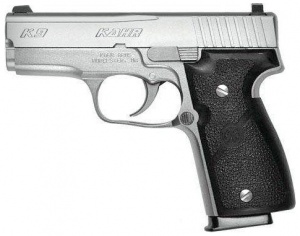 Ivan checks the sewers with his Kahr K9.

Ivan holds the Kahr K9 up to his nose.

Detective Kiril draws his Beretta to investigate in a sewer tunnel.

Detective Kiril holds the Beretta near the end of the film.
Retrieved from "https://www.imfdb.org/index.php?title=I_Spit_on_Your_Grave_2&oldid=1126005"
Categories: