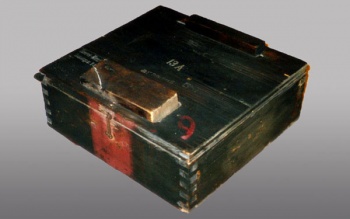 The Holzmine 42 is a German World War II anti-tank mine. Initially it was a stop-gap solution because of shortages between production of the Tellermine 35 and the Tellermine 42 but the vast demand of land mines led to the production of more than 5 million pieces. This type had some big advantages but also some disadvantages. The big plus was that it was very hard to detect with mine detectors because it was made of wood instead of metal, and the detectors responded to metal. But the downside was that in mushy environments (also when buried in the ground) the wood started to rot which made the mine unreliable and dangerous.

The Holzmine 42 and variants can be seen in the following films, television series, video games, and anime used by the following actors: