As muzzle-loaders are the most frequently mis-identified firearms on the site, I'm creating a simple guide to their understanding and identification.

The flintlock, introduced in France in the early 17th century, was the first method of firing a gunpowder weapon without using a burning match that was suited to mass production (wheelocks having always been prohibitively expensive due to their complexity). It used a piece of flint held in a set of jaws called a cock, striking a piece of steel called a frizzen, igniting a small powder charge in a flash pan which the frizzen also acted as a cover for. This would then ignite the main charge. This "true" flintlock was an evolutionary development of early flint-ignited lockwork patterns, the snaplock, snaphance, Miquelet and doglock, incorporating all of the improvements of these individual designs (flint ignition, a self-opening pan cover, the combination of striking steel and pan cover into a single part and a half-cock position that allowed the flint to be aligned with the pan and the pan filled without having the weapon in a ready-to-fire position: the latter is the origin of the phrase "going off half-cock") into a single one. 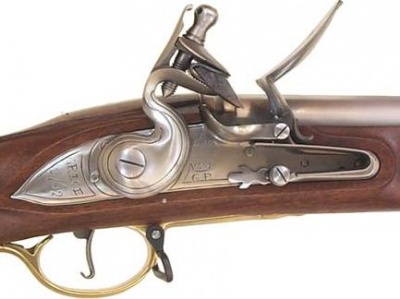 The percussion lock, otherwise known as a caplock, was introduced in England and America in the 1820s. It used a hammer striking a fulminate of mercury percussion cap (similar to those used in children's cap guns) placed on a "nipple" that retained it, the flame of which would then ignite the main charge. This was significantly simpler, faster and more reliable than the flintlock. 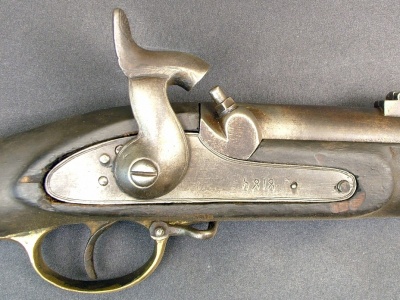 The term "musket" refers specifically to firearms without rifling, which are inherently inaccurate and can typically only be used to about 75 yards. "Rifle" refers to rifled firearms, whether breech or muzzle loading. While rifling dates back to the 15th century, rifles only really came into serious military use in the late 18th: earlier rifles required either breech-loading at a time before such a mechanism could be mass-produced or bullets made to tighter tolerances than were realistically possible with period technology, and early powders tended to foul and corrode a rifled bore. Even in the 18th century rifles were a specialist weapon used by soldiers separate from the musket-armed line infantry, as although they were far more accurate they could take up to a minute to load due to the difficulty of ramming the projectile down the rifling grooves. When the introduction of the Minié ball in the 1850s speeded loading, allowing all infantry soldiers to be armed with rifled weapons, the rifles adopted were of musket length and sometimes referred to as rifle-muskets. Rifle units typically received as shortened version of the infantry rifle-musket, referred to simply as a rifle. This practice was gradually abandoned by the 1870s (earlier in the United States due to the Civil War) and all long guns that fired bullets were simply referred to as rifles.

The term musket enjoyed a brief revival in late 19th and early 20th century America as a marketing term used by various companies to refer to the militarized versions of their commercial products. Thus the militarized Winchester 1866 as used by the Turkish army was referred to as the Winchester 1866 Musket, and so on, however this was not a technical term and further details are outside the scope of this article.

Used by the British military from 1722 to about 1840, most notably in the American revolution and the Napoleonic wars. Also used by the American Continental Army prior to the introduction of the Charleville, British East India company and Mexican army 1836-1848. Idenfifiable by it's pin-retained barrel, ramrod pipes and plain nosecap.

Used by the French military from 1763 to about 1840, most notably in the American and French revolutionary wars and the Napoleonic wars. Most nations adopted similar weapons at the time. Identifiable by its barrel bands and split-banded funnelled nose cap.

Short, heavy caliber rifle used for hunting boar and deer in German forests. As huntsmen ("jaegers") was a middle-class profession in pre-industrial Germany, the rifles were often quite ornate. The Jeager rifle is believed to have originated in the late 17th and early 18th centuries. They can be idenfified by their short length, stock to the muzzle, sliding wood patch box and whole hand trigger guard spur.

Evolved from the Jaeger rifle, with a longer barrel for longer range shots in the more open American wilderness, and of smaller caliber to reduce lead consumption, the Pennsylvania rifle, also sometimes known as a Kentucky rifle, was a distinctly American design which saw some use among militia troops during the American revolution. They can be identified by their long length, stock to the muzzle (sometime with brass endcap), curved butt and brass patchbox.

Introduced in 1800, the Baker rifle was the British military's first issued rifle, based on German Jaeger rifles carried by German mercenaries employed by the British during the American revolution. It was famous for its use by the Rifle Corps during the Napoleonic Wars and would have a long life as surplus weapons in North America afterwards. They can be identified by their short length, pinned in barrel, brass patchbox and bayonet bar.

Popularised in the US during the 1840s, the Plains rifle evolved from the Pennsylvania rifle during the era of Western expansion. As a larger caliber was needed to take Western game, the half stock and shorter barrel became popular in order to keep down the weight. Plains rifles saw a resurgence in popularity during the birth of muzzle-loading hunting in the 1970s.

The first percussion US military musket, and also the first with interchangable parts, widely used during the Mexican-American War and also the early Civil War. Identifiable by it's split front band and endcap, high spur hammer, flat buttplate and lack of rear sight.

The main weapon used during the US Civil War, identifiable by its block rear sight, barrel bands with retaining springs, curved buttplate and C-shaped hammer. The similar Model 1863 rifle had a standard S-shaped hammer, and many had no band springs.

Imported in large numbers during the US Civil War, and also used by the British in Crimea. Identifiable by its screwed on barrel bands, leaf rear sight, brass endcap and blued finish (faded on the pictured example).