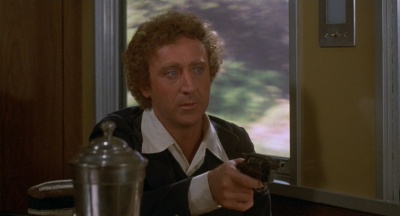 Gene Wilder (1933-2016) with a Colt Detective Special as George Caldwell in Silver Streak.

Gene Wilder was an American comic actor known for his roles in such films as The Producers (for which he was nominated for an Academy Award for Best Supporting Actor), Blazing Saddles, and as Willy Wonka in the 1971 adaptation of Willy Wonka & the Chocolate Factory. In addition, he co-starred with fellow comic actor Richard Pryor in four feature films, including Stir Crazy, Silver Streak, See No Evil, Hear No Evil, and Another You. He passed away on August 29th, 2016.