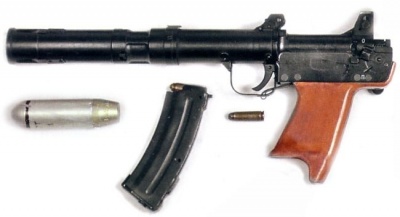 BS-1 grenade launcher with grenade round and blanks - 30mm

The BS-1 is a "silent" underbarrel grenade launcher developed in the Soviet Union in 1970s. Some sources refer to it as the GSN-19, though this appears to actually be the name of the complete weapon system consisting of the launcher and a parent AKMS rifle. The BS-1's standard projectile is a special 30mm AP-I (Armour Piercing – Incendiary) grenade designated as VOG-T. Unlike the VOG-25 grenade used in the GP-25, the VOG-T grenade has no propelling charge in itself. The system instead functions more like a rifle grenade launcher, using special blank propelling cartridges loaded into the BS-1 from a detachable box magazine to fire the grenades (the magazine holds 8 rounds for the earlier 7.62mm based blanks and 10 rounds for the later 5.45mm based blanks). The blanks are fed into a chamber by a bolt-action mechanism. When the trigger is pulled, the blank fires, the gas pressure acting on a telescopic piston that extends from the breech to push the grenade out of the barrel. The piston is captive, and seals the expanding gases in the rear part of the barrel, which eliminates most of the sound of firing and the muzzle flash (thus making the weapon a "silent" grenade launcher). It is functionally similar to the Soviet "silent" captive piston-based pistol cartridges (SP-1 to SP-4), save that the ammunition is two-part and the piston is part of the weapon rather than the case.

After a moment, the pressure drops to a safe level, and the weapon can be reloaded by loading in a new 30mm grenade from the muzzle and operating the bolt to eject the spent blank and chamber a new one. A special spring is used to retain the grenade in the muzzle until firing.

The BS-1 was originally adopted in a suppressed weapon system (or weapon complex) known as the Tishina (Silence), and was a successor to Soviet Union's previous "Device D" and "Device DM" systems. Tishina consists of an AKMS with a PBS-1 suppressor, subsonic 7.62 US ammunition, and a BS-1 underbarrel grenade launcher with grenade launching sights. When the Soviet army switched to 5.45x39mm as their standard rifle cartridge, the system was replaced with the Kanarejka (Canary) system, which consists of an AKS-74UB with PBS-4 suppressor and BS-1 grenade launcher. The BS-1 itself was also slightly reworked, with its mounting brackets improved to better fit the AKS-74UB, and its launching ammunition switched over from 7.62mm-based blanks to 5.45mm-based blanks.

The BS-1 grenade launcher and variants can be seen in the following films, television series, video games, and anime used by the following actors: