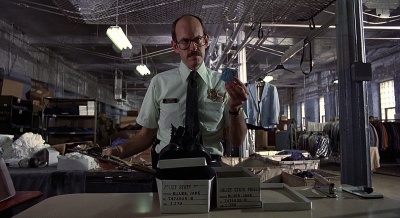 Frank Oz as the Corrections Officer in The Blues Brothers.

Frank Oz is an American actor/director who is well known for voicework in feature film and television, notably as the voice of Yoda in the Star Wars film series as well as the voice of several Muppet characters. He has appeared in acting roles (notably in those films directed by John Landis) and has directed such films as The Score and Little Shop of Horrors (1986).

See the Discussion for the films in the IMFDB directed by Frank Oz.