The Farquharson Rifle/action was invented by John Farquharson of Daldhu, Scotland in the early 1870's. Farquharson was a poacher, gamekeeper, champion rifle shot and gun inventor during his lifetime. Farquharson's falling-block underlever design owes an obvious debt to Alex Henry, the Scottish riflemaker who is the Henry in the Martini-Henry rifle design. Farquharson's design is very strong and is one of the few designs to make the transition from the black powder era to the smokeless powder era. Farquharson rifles have been manufactured over the last 130 years by Holland & Holland, Westley Richards, Gibbs, and Jeffery. The Ruger No.1 somewhat resembles a Farquharson rifle. The Farquharson Rifle has been chambered from .22 Short to .600 Nitro Express and everything in between. It's a powerful and reliable design. The fact that rifles are still being manufactured with the "dropping block in solid steel" in 2012 speaks volumes for the engineering ability of John Farquharson. 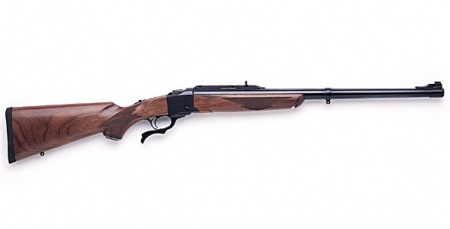 The Ruger No.1 single-shot rifle was introduced by Ruger in 1967. Bill Ruger was an admirer of heavy single-shot English rifles and had several in his personal collection. In 1967 it was considered to be very risky, even foolish, to release a single-shot rifle in major calibers. However the rifle was an overnight success and is still in production. It can be had in calibers ranging from .204 Ruger to .458 Lott. In addition the Ruger action has served as the basis for many customised rifles over the years. Rifles chambered for even heavier calibers such as the .470 Nitro Express. Nevertheless the Ruger No. 1 resembles a Farquharson rifle (especially in the under lever latch) and is on the Farquharson page, even though it most resembles the Fraser single shot internally.