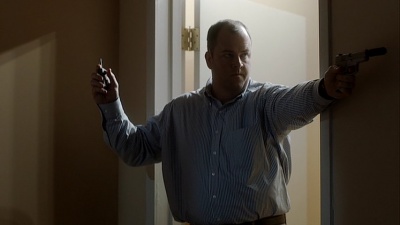 Chris Sullivan holds the Smith & Wesson 3913 as an assassin in The Americans.

Chris Sullivan is an American actor/musician who is well known to television audiences for his role as Toby Damon in the NBC drama This Is Us, for which he received two Primetime Emmy Award nominations. In addition, he has had roles in such series as The Americans and Stranger Things. He also appeared in the MCU film Guardians of the Galaxy Vol.2, where he portrayed the character of "Taserface", a role he returned to voice in the Disney+ animated series What If...?.