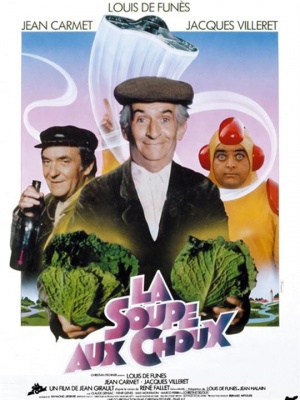 The following weapon was used in the film The Cabbage Soup:

A double barreled shotgun is used three times in the film. The first time is when Claude "Le Glaude" Ratinier (Louis de Funès) sees the alien (Jacques Villeret), only to realize that he is friendly. The second time, Le Glaude uses the shotgun to threaten his neighbor Francis "Le Bombé" Chérasse (Jean Carmet) during a confrontation. Later in the film, Le Bombé equips the shotgun and uses it to expel the mayor from his house.

Brichet Nantes SXS side by side shotgun - 16 gauge

Le Glaude opens his door after the alien's arrival, shotgun in hand.

He then reloads it with a green shell and a red one.

Le Bombé aims the shotgun at the mayor while Le Glaude proceeds to throw his briefcase at him. Here, the shotgun lacks a sling.
Retrieved from "https://www.imfdb.org/index.php?title=Cabbage_Soup,_The&oldid=1490615"
Categories: