Chingachgook, the Great Snake (Chingachgook, die große Schlange) is a 1967 East German adventure movie directed by Richard Groschopp and based on the novel "The Deerslayer" by James Fenimore Cooper. Gojko Mitic appears as Mohican warrior Chingachgook, "The Great Snake", and Rolf Römer as Natty Bumppo, known at that time as "Deerslayer".

The pistol "fires", the lock is motionless.

A pair of pistols in Tom Hutter's chest.

Deerslayer examines one of these pistols. It appears to be longer that officers' pistols

A good view of Warley's pistol during the attack on Hurons settlement.

Chingachgook's musket, gifted to him by Delaware chief (Adolf Peter Hoffmann), looks like a hunting gun. Possibly it is an original gun of flintlock era, similar to Jaeger Rifle, or a modern replica of such gun (a mockup, based on modern shotgun and fitted with fake flintlock, is also possible but seems less credible). It appears to be that a pair of props is used in the movie, as in several scenes Chingachgook's musket has a metal head of ramrod, and in some - a wooden one.

Delaware chief gifts a gun to Chingachgook in gratitude for his salvation.

A close view of the barrel. The ramrod has metal head.

Chingachgook holds his musket. The ramrod has wooden head.

A close view of the barrel. The ramrod has wooden head.

Chingachgook with his musket. The muzzle is seen. 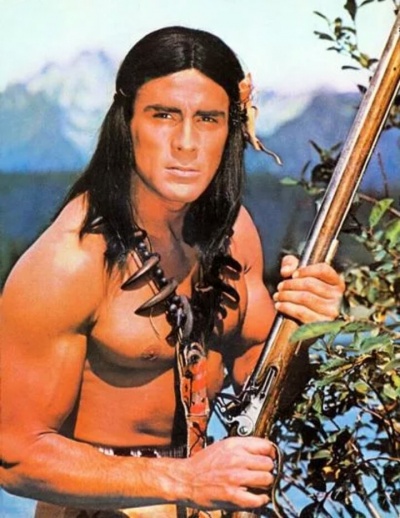 A good view of Chingachgook's musket on promotion still.

Deerslayer's musket looks generally similar to Chingachgook's one, resembling a Jaeger Rifle. Like Chingachgook's musket, Deerslayer's gun also has a metal or a wooden head of ramrod in different scenes, so possibly two props were used.

A general view of Deerslayer's gun.

A close view of the lock. Note the lack of the flint.

Deerslayer sleeps with his musket at hand.

Deerslayer's musket has a ramrod with wooden head.

When Deerslayer is in close combat with a Huron warrior, his musket is replaced with another prop that lacks any decorations on stock.

A good view of the gun.

Hurry Harry has a rather different musket, with military outlook. The lack of barrel bands makes this musket look similar to Brown Bess though it's hardly an original gun. The ramrod looks different in various scenes.

Harry (at the right) holds a musket.

A good view of Harry's gun.

Harry holds his musket. The ramrod is placed different in comparison with previous screenshot.

Harry cocks the lock of his musket.

Tom Hutter has a musket that seems to be a hunting gun. It looks less elaborated that Chingachgook's or Deerslayer's guns.

Tom's musket is seen at the left.

Another view of Tom's musket.

A Huron warrior "fires" his musket.

Soldiers' muskets in the fort.

Muskets are seen during the attack on Hurons settlement.

A Huron warrior "fires" his musket.

Soldiers' muskets after the massacre of Hurons.

A pair of muzzleloading cannons, seen in British fort, appear to be mockups. They are mounted on naval-style carriages.