The Axe. 1943 (Topor. 1943) is a 2021 Russian two-part made for TV war film directed by Vladimir Semenovykh. It is a sequel to The Axe (Topor) (2018). In Summer 1943 a Soviet scout group where Ivan Ilyich Rodin (Andrey Smolyakov) serves performs a mission behind enemy lines and discover a German tank division that the Soviet headquarters is unaware about. But the scouts are ambushed, and the injured commander orders Rodin to return and bring the news. But after the return Rodin is suspected in disinformation as the same division is discovered by another scout group in a very different place. Rodin has not only to prove his truth but also to avenge his comrades-in-arms.

Alyoshin surrenders his revolver when he is arrested.

Nikolay Rodin draws his pistol in the climactic scene.

...but is gunned down by Capt. Odintsov.

Many Soviet soldiers and officers, including Ivan Rodin (Andrey Smolyakov) and Capt. Belov (Ivan Shibanov), are armed with PPSh-41 submachine guns. Both drum and stick magazines are seen.

Capt. Belov holds a PPSh during the mission behind enemy lines.

A Sergeant with a PPSh accompanies Col. Alyoshin.

Kasymov (Igor Radnaev), a scout of Capt. Odintsov's group, fires a PPSh during the battle with Maj. Nikolay Rodin's Brandenburgers.

Kruglov (uncredited), another scout of Capt. Odintsov's group, fires his PPSh in the same scene.

Kruglov fires his PPSh during the final battle.

Two of the soldiers, accompanying Marshal Zhukov, are armed with PPSh-41s with stick magazines. 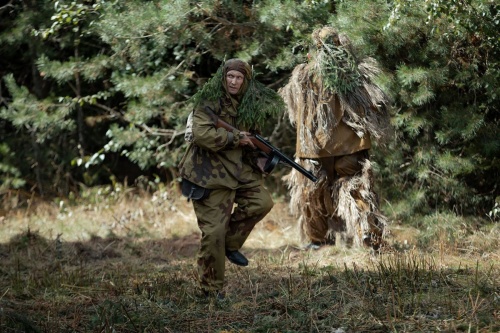 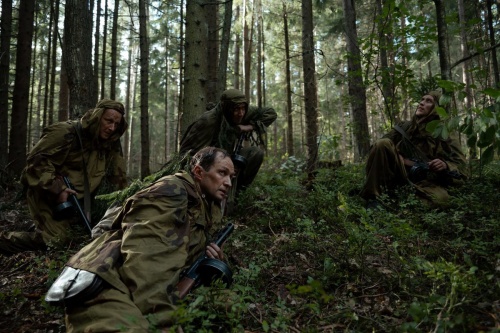 Odintsov (in center) and Somov with their PPS-43 submachine guns.

Odintsov fires his PPS during the battle with Maj. Nikolay Rodin's Brandenburgers.

Somov fires his PPS in the same scene.

Somov's PPS is seen from another side.

Somov in the final battle. 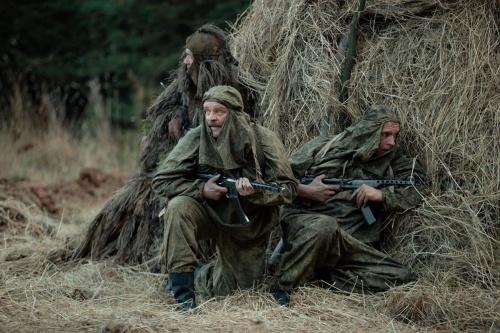 Odintsov and Somov with PPS-43s on a promotional image.

Capt. Odintsov (Aleksandr Golubev) is armed with an MP38 when he is disguised as a Feldgendarm. An MP38 is briefly seen in hands of a German soldier.

A German soldier fires at Ivan Rodin who hides in a river. In the next moment this soldier's MP38 switchtes to an MP40.

Odintsov, in the Feldgendarmerie uniform, aims an MP38 at a Lieutenant of the tank troops.

Odintsov fires at the said Lieutenant who tries to escape.

A number of German soldiers carry MP40 submachine guns. Some of them turn out to be Denix non-firing replicas.

A German soldier with MP40 (seems to be a Denix replica) is killed by Rodin. In previous scene he was seen with an MP38 (see above).

A Brandenburger Zakharchenko (stunt coordinator Igor Novosyolov) fires an MP40 during the battle with Odintsov's group. This is definitly a real MP40 as it fires correctly.

A Feldgendarm with an MP40, seemingly a Denix.

For a moment, Odintsov's MP38 swithches to an MP40 due to a continuity error. This MP40 is also a Denix replica.

A driver of the radio direction finder car is killed by Rodin. His MP40 also seems to be a replica.

A radio operator fires from the car in the same scene. His MP40 is a real gun, and a very battered one.

One of Odintsov's scouts and a German soldier are seen with SVT-40 rifles.

Soviet soldiers with Mosin Nagant rifles on positions in the night scene. 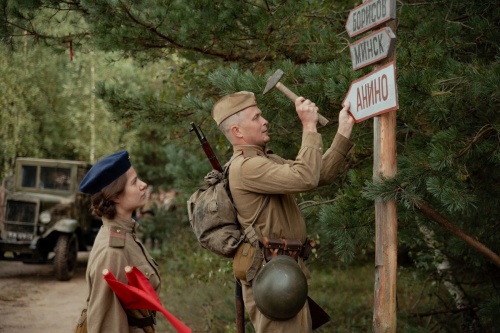 A Soviet soldier carries an M91/30 rifle on a promotional image.

Many German soldiers are armed with Karabiner 98k rifles.

A Feldgendarm on motorcycle carries a Kar 98k. This is a late model with hooded front sight.

A Brandenburger fires his rifles during the battle with Odintsov's group.

A soldier carries a rifle on sling.

A soldier at the foreground holds a rifle that is identical to Karabiner 98k but has straight bolt handle. Supposedly this is a rework Kar 98k with Gewehr 98 bolt. The barrel of the rifle is very battered.

Soldiers with Kar 98k rifles in the lorry. The same battered barrel is seen at the background left.

Another view of the soldiers in the lorry.

A Brandenburger fires his rifle.

A rifle on the body of a Brandenburger.

Major of the Brandenburg special forces Nikolay Rodin (Nikolay Kozak) uses a Karabiner 98k with Zeiss ZF39 sniper scope during the ambush on the Soviet scouts.

Karabiner 98k with Zeiss ZF39 scope - 7.92x57mm Mauser. This sample has a hooded front sight unlike the screen gun.

A close-up of the scope.

One more view of the rifle.

The front sight is seen.

In one scene a German soldier holds an anachronistic Sturmgewehr 44 with an even more anachronistic Zielgerät 1229 Vampir infrared night vision device (it was first used in combat only in February 1945). The device is an inexact replica only marginally resembling the real Vampir.

A soldier observes the Soviet scouts crossing the front line through the night vision device. The battery backpack is seen on the soldier's back.

A DP-27 machine gun is seen in the Soviet trenches.

MG42 machine guns are mounted on Feldgendarmerie motorcycles. Kasymov (Igor Radnaev) uses a captured MG42, covering with fire the retreat of the other scouts. Very likely a single prop is reused in all these scenes.

An MG42 on the motorcycle.

An MG42 on another motorcycle.

An abandoned MG42 near the German headquarters.

Ivan Rodin (Andrey Smolyakov) throws an RGD-33 hand grenade during the battle with the Brandenburgers.

Germans use plywood mockups of Panther tanks to fool the Soviet scouts.
Retrieved from "https://www.imfdb.org/index.php?title=Axe._1943_(Topor._1943),_The&oldid=1439243"
Categories: