Attention bandits! is a 1986 French crime drama directed by Claude Lelouch. Simon Verini (Jean Yanne), an expert in stolen jewelry and arts, lost his wife during a kidnapping. He suspects that it's a work of one of his "clients" but has no chance to find him as he is framed in a theft. After ten years in prison Verini is released, and now he has two goals: to unite with his daughter and to find and punish the murderer of his wife.

The following weapons were used in the film Attention bandits!:

While searching for the murderer of his wife, Simon Verini (Jean Yanne) arms himself with a Colt Python

Verini and Charlot (Charles Gérard) aims their revolvers at the kidnapper and his girlfriend.

Verini and Charlot aims at the kidnapper's girlfriend.

In the scene in hotel Charlot (Charles Gérard) is armed with a Smith & Wesson Model 10HB revolver.

A close view of Charlot's revolver.

Verini and Charlot aims at the kidnapper's girlfriend.

During the scene in hotel the kidnapper (actor unknown) draws a long barreled revolver, hidden in wardrobe. It appears to be an Arminius HW-7 (version without vent rib}. 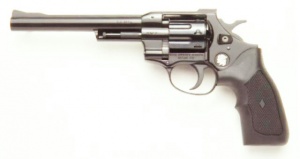 During the kidnapping and murder of Françoise Verini (Christine Barbelivien) the kidnapper (whoes identity is revealed later) is armed with an unidentified revolver.

MAT-49 SMGs are briefly seen in hands of gendarmes in several scenes.