The 317th Platoon is a 1965 war film originally released in France under the title La 317e Section. The film was directed by Pierre Schoendoerffer (Diên Biên Phú) and was based on his own novel of the same name. The story is set during the latter stages of the French-Indochina War, revolving around a group of French soldiers and their Laotian allies who trek through the jungle to the safety of a French outpost as the Viet Minh pursue them. The film was shot in Cambodia with the assistance of the Royal Cambodian Army.

The following weapons were used in the film The 317th Platoon:

The MAT-49 is used by the platoon's leaders and senior NCOs at various points in the film, including L'adjundant (Warrant Officer) Wilsdorf (Bruno Cremer), Sergeant Roudier (Pierre Fabre) and Laotian Sergeant-supplétifs Vit and Ba Kut (Boramy Tioulong - who was also the film's military advisor). 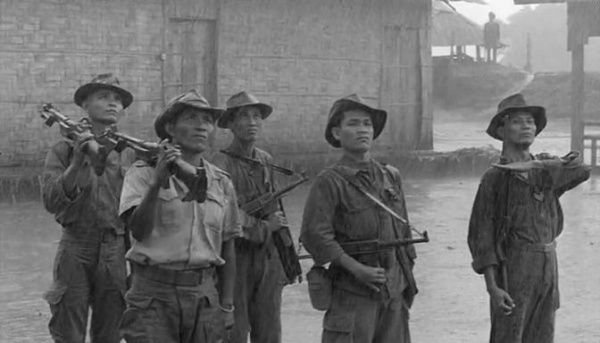 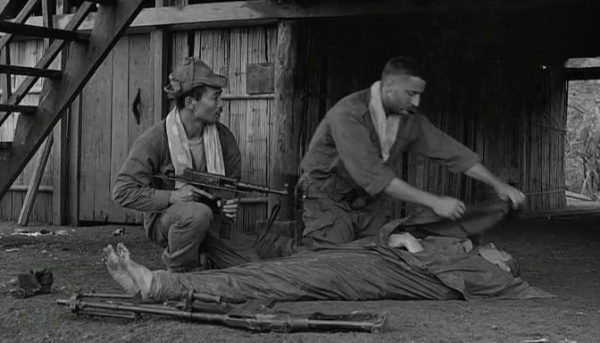 Vit covers Wilsforf as he recovers personal possessions from the mortally wounded Roudier. 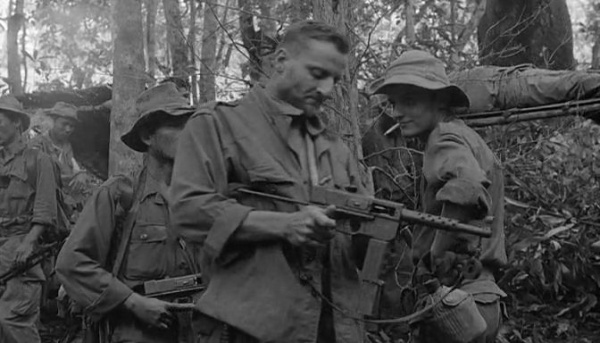 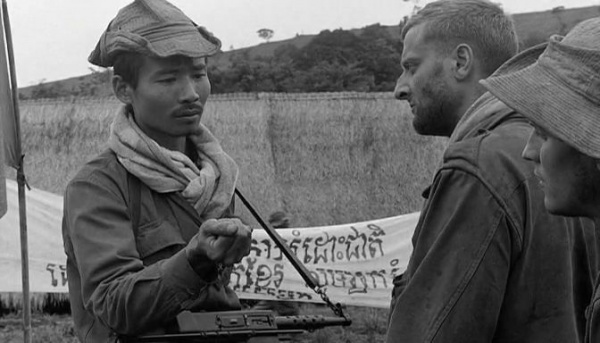 "The White runs out. Yellow Stays."
Vit demonstrates how the Viet Minh describe their victory at Dien Bien Phu to villagers by breaking an egg.

The M1917 Enfield rifle is carried by most of the Laotian soldiers. The Viet Minh forces encountered by the platoon throughout the film also appear to be armed with Enfields. 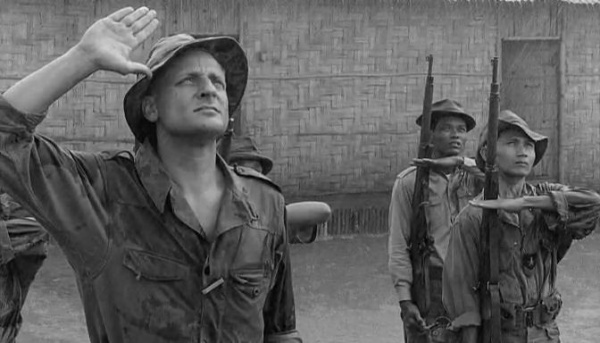 Laotian soldiers hold M1917 Enfields as the French flag is lowered at their camp. 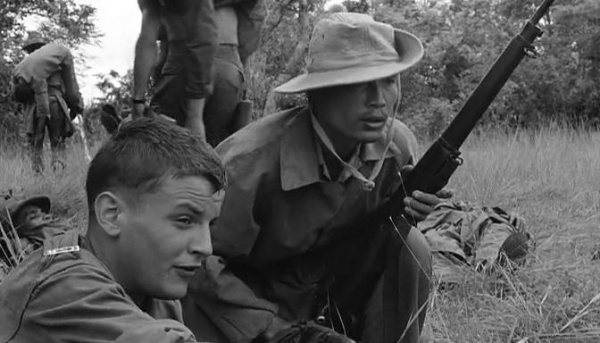 Torrens gives instructions to a soldier. 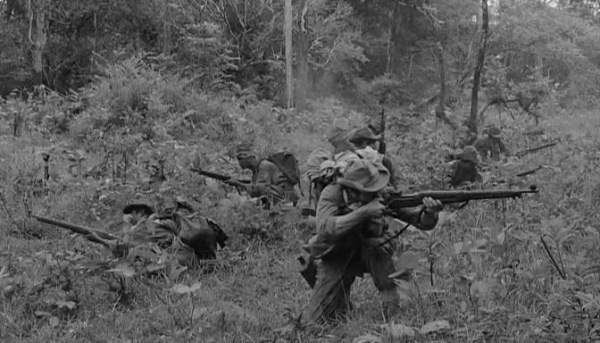 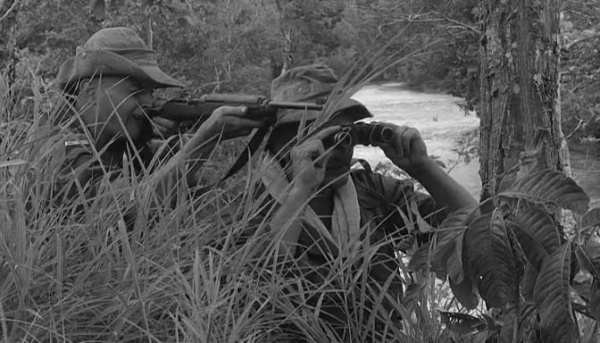 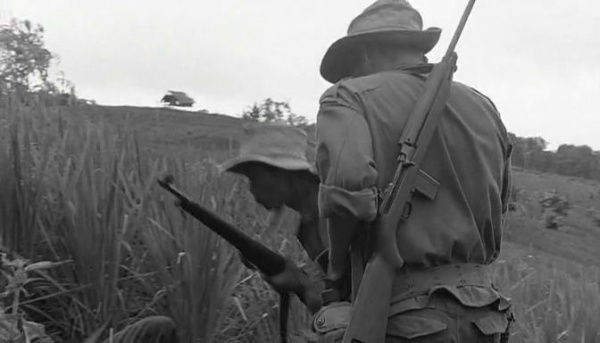 The M1 Carbine is slung over Torrens' back. 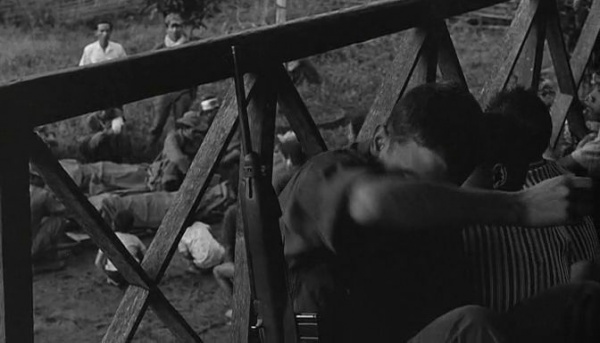 The M1 Carbine sits next to Torrens. 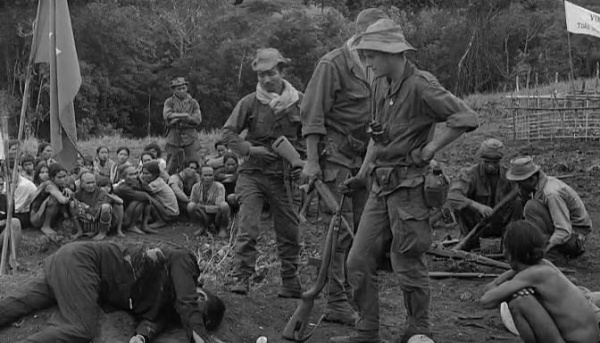 Torrens and Wilsdorf hold M1 Carbines as they look at a dead Viet Minh commissar. 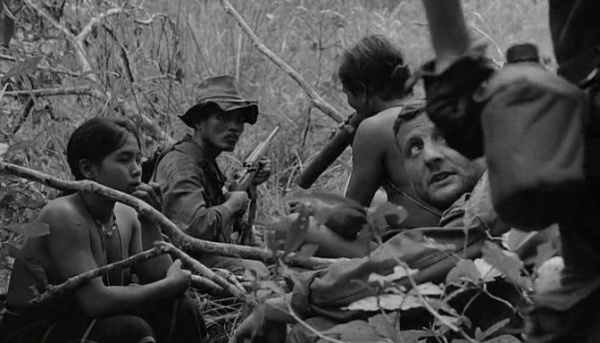 The MAS-36 rifle is the main weapon of Corporal Perrin (Manuel Zarzo), the platoon's radio operator. MAS-36 rifles are also used by some of the Laotian troops. 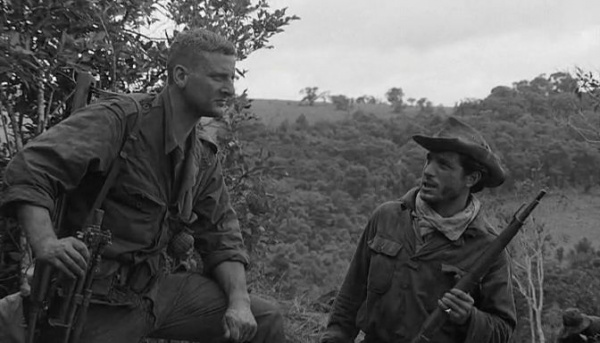 Perrin holds a MAS-36 while talking to Wilsdorf. 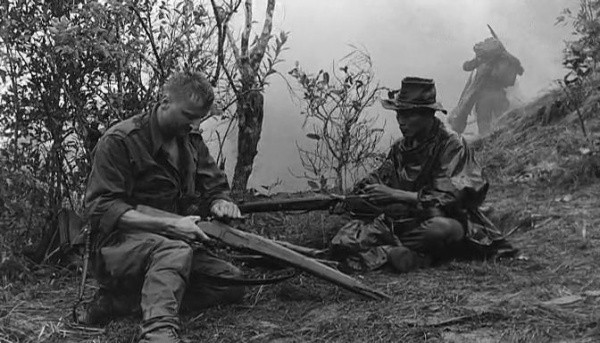 Wilsdorf and a Laotian disassemble the MAS-36s of wounded soldiers to prevent them from being used by the enemy. 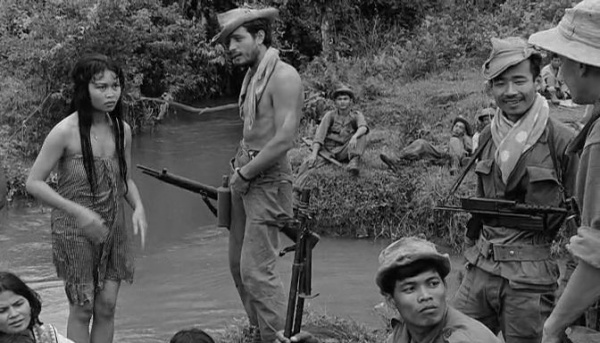 Perrin holds a MAS-36 when the platoon encounters some villagers. 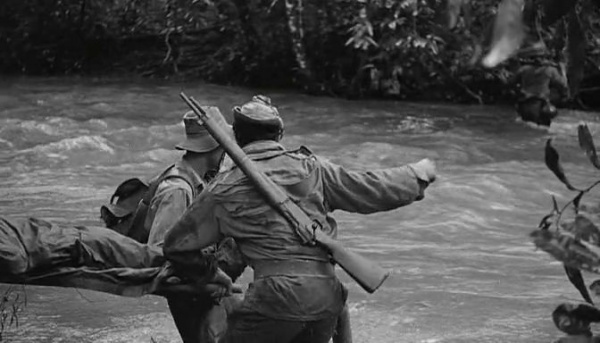 With a MAS-36 on his back, Perrin helps move a stretcher across a river.

A few Laotians are armed with MAS-49 rifles, which are mainly used to launch rifle grenades. A MAS-49 with an APX L806 scope is also seen in several scenes, most notably when a Viet Minh column is ambushed by the soldiers and during a raid on a captured village. 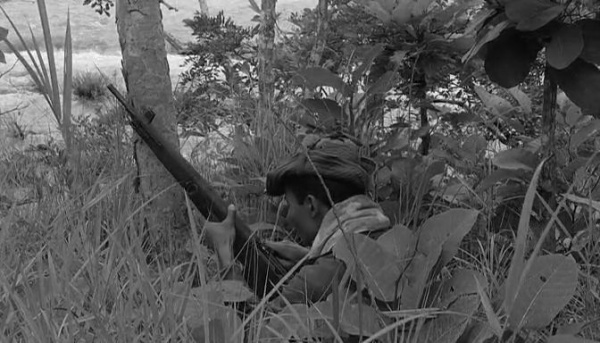 A Laotian soldier cocks his MAS-49. 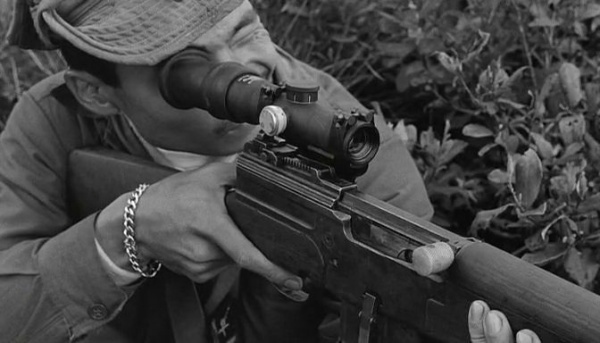 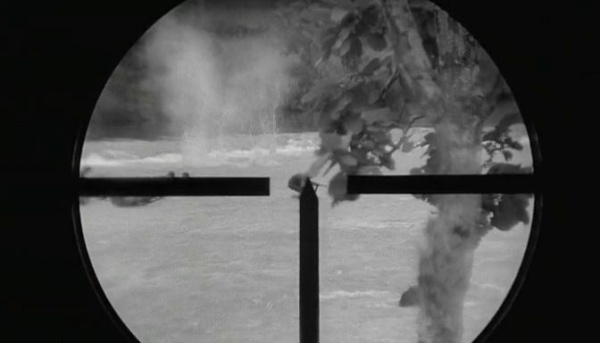 The view through the scope as Vit fires. 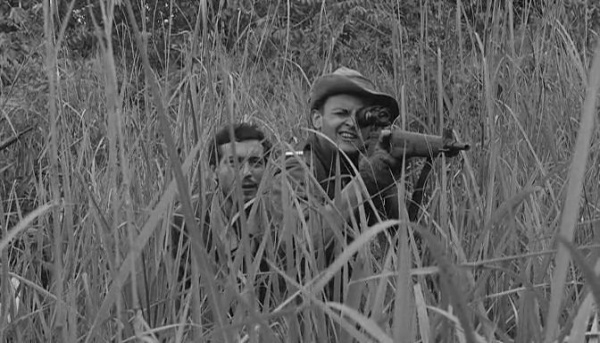 The M1918A2 BAR is a commonly-seen weapon in the film, although the characters refer to it as a FM (Fusil-mitrailleur/automatic rifle). Laotian troops use it to suppress enemy forces, while Wilsdorf uses one to cover the retreat of the platoon as it tries to evacuate its wounded. 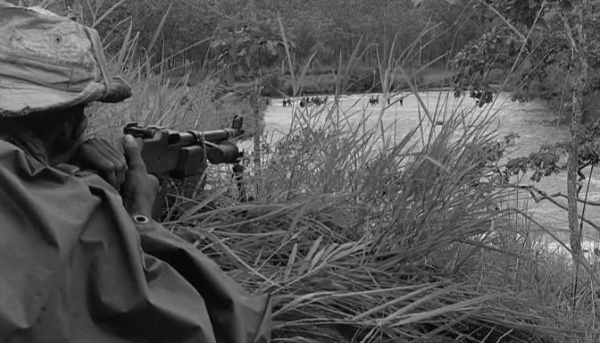 A Laotian soldier prepares to fire his BAR. 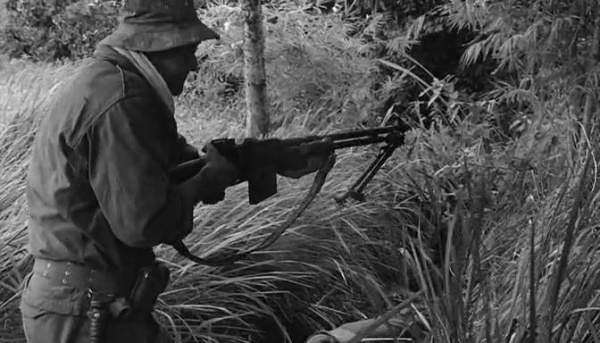 Wilsdorf lays down covering fire with a BAR. 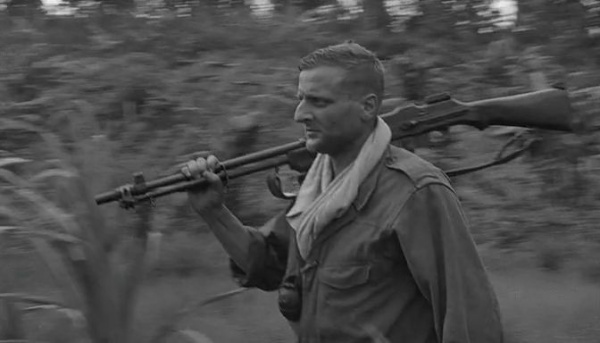 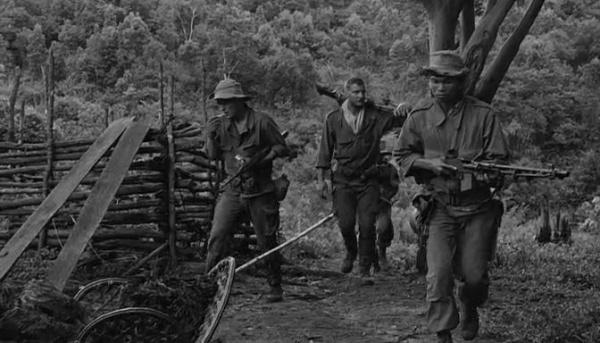 A Laotian holds a BAR as the troops advance through a village.

What appears to be a Mills Bomb is often seen attached to Wilsdorf's uniform. 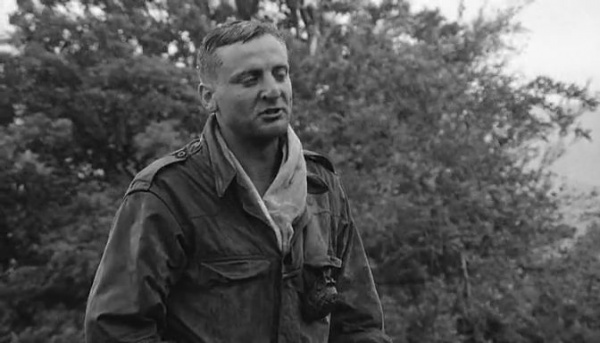 A Mills Bomb, as seen attached to Wilsdorf's shirt pocket. 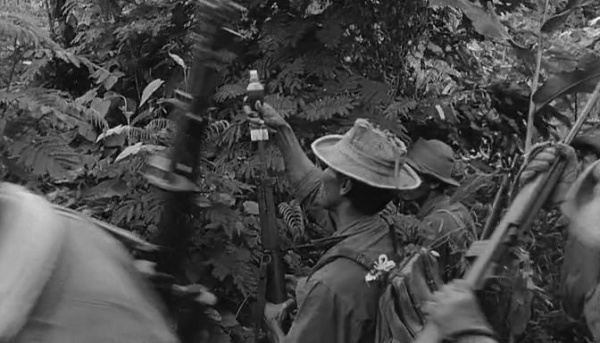 A soldier attaches a rifle grenade to his MAS-49. 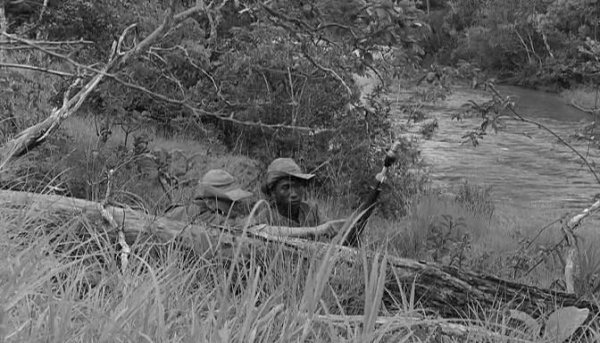 A soldier prepares to fire the grenade at an enemy machine-gun post.
Retrieved from "https://www.imfdb.org/index.php?title=317th_Platoon,_The&oldid=1416559"
Categories: