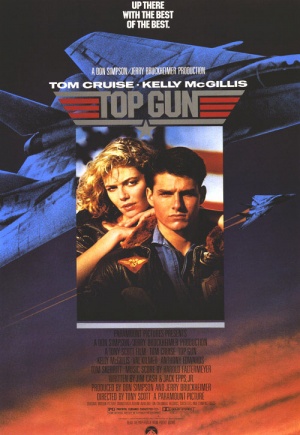 Top Gun is a 1986 military action drama starring Tom Cruise as Lieutenant Pete "Maverick" Mitchell, an F-14 Tomcat aviator who is invited to train with other aviators at the US Navy's elite aviator school, known as "Top Gun". The cast includes Val Kilmer, Anthony Edwards, Kelly McGillis, and Tom Skerritt. The film was directed by Tony Scott and was made with the cooperation of the US Navy. Almost 35 years later, Cruise would return to the role in the 2022 sequel, Top Gun: Maverick.

The following weapons were used in the film Top Gun:

Although not shown being fired in the film (despite the pilots "switching to guns" multiple times), the F-14A Tomcats flown by the protagonists are armed with internally-mounted M61 Vulcan cannons. The enemy planes, designated in the film as the "MiG-28" (in reality, the planes are American-made Northrop F-5E and F-5F Tiger IIs), are seen firing "Gatling"-type guns on the F-14 Tomcats in the final dogfight. Whenever the "guns" are seen fired, the closeup of the weapon appears to be the M61 Vulcan as well (Russian fighter aircraft at the time were armed with the 23mm GSh-6-23M or a 30mm GSh-6-30). The "Vulcan"-type gun closely resembles the mockup used in 1983's Blue Thunder and 1986's Band of the Hand.

Close up of a Gatling Gun firing from a MiG-28. The "Vulcan"-type gun closely resembles the mockup used in the 1983 film Blue Thunder and would be more readily available for use than an actual M61.

A MiG-28 firing its twin guns at "Iceman's" plane.

Close up of another MiG's Gatling Gun.

The firing port for the M61 Vulcan is seen near the nose of Maverick's F-14A Tomcat, just below the numbers.

Maverick and Iceman's F-14A's on the flight deck of the USS Enterprise after the final dogfight; the firing ports for the M61 Vulcan can be seen near the nose of each aircraft.

While not shown firing, the Northrop F-5E and F-5F Tiger II fighters representing the enemy "MiG-28" fighters are still armed with their Pontiac M39 cannons mounted in the nose forward of the canopy.

A MiG-28 firing its fictional guns at "Iceman's" plane. While the MIG's are seen firing "Gatling-type" guns from the wing roots, the two M39 cannons are still visible in the nose of the aircraft. At the time, the actual Top Gun school used the F-5 as well as the A-4 Skyhawk as MiG aggressors during training exercises.

In reality, the F-14 Tomcats would be using M61 Vulcan 20mm cannons, and even though both jets are seen using the same guns, the Russian MiG-28 would not be using the same guns. In reality, the MiG-28 does not exist; Mikoyan Gurevich has only used odd numbers for their aircraft (MiG 25, 29, 31, and so on). The M61 Vulcan cannons on the F-14 are internal, making it not readily visible other than a momentary puff of smoke and muzzle flash from the cannon port on the left side of the forward fuselage far below the cockpit (see the film The Final Countdown).