I was looking over it, and I could swear it looked like a P220. ~ Revolver

== There are two distinct versions of this movie. I bought the DVD and I saw the version on television, and there is quite a bit of a difference between the final battle in both versions. The final battle in the television cut is much longer and the music is different. Does anyone have a DVD version that matches the longer battle (like the one seen on tv)? Because I bought the original DVD when it came out and it doesn't have these scenes. MoviePropMaster2008 03:36, 20 November 2008 (UTC)

I have been wondering about this myself. Like, why wasn't the part where Brad drives an ATV (firing an MP5K) while Jane rides in a trailer (firing the Minigun) seen in the DVD version even though it's been shown on TV? I believe the version you've seen on FX a couple of times now is the Director's Cut, which IMDB says is 6 minutes longer. -MT2008 03:44, 20 November 2008 (UTC)

It is the Director's Cut. Don't know why FX chose to show that version, but the ATV Minigun scene appears in the DC and not in the theatrical version. If you go to look for it, find Mr. and Mrs. Smith UNRATED. --Clutch 06:10, 20 November 2008 (UTC)

I own the unrated cut and have every intention of adding the screencaps soon. But I have a few other things to do first. - Gunmaster45

That is not a Ruger 10/22 nor is it a modified 10/22 in the Carnival scene. It is a constant air (see the air tube attached to the rifle) custom air rifle that fires metallic BBs that are larger than standard BBs (but I think smaller than Slingshot BBs). I dont' remember the manufacturer but it was common in Coney Island's Hey day and I used to shoot these all the time as a kid. They are AIR guns built from the ground up and are not based on any live firearm. MPM2008

Really? Dammit, I could of sworn it was a 10/22. Doesn't it look like one or is something wrong with my vision? I bet the barrel is bigger than the BBs, because that's how those corrupt carnival bastards get you. It's hard to accurately use a gun when the rounds are tumbling out of the barrel.- Gunmaster45

I heard an interesting quip from another armorer in that (while waiting in the elevator) John and Jane intentionally keep their MP5 Bolts open (to keep the bolt carrier locked back and help cool off the gun after firing so many magazines), and it is assumed that they are 'skilled enough' to quickly slap down the bolt handle to charge the weapon a mili-second before they go charging out the door. Interesting point there. MPM2008

On the standard DVD Label it shows a weird looking double trigger guard gun, and a hole bunch of weapons that is worth putting on this page if any one can find or take a picture of the DVD rom itself and upload it onto IMFDB. I am not totally sure if your unrated DVD Label shows this Gunmaster45. But if no one uploads I'll take a picture myself.

Yeah, that's the Stealth-1, and I already had it saved. If you mean something else, upload it and put in the discussion section first so I know what you mean (I have the extended cut, so I don't have the standard DVD). - Gunmaster45

Does he mean this DVD label? 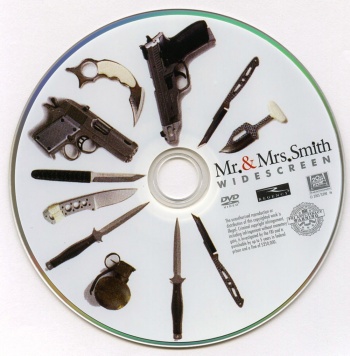 I was bored so I built Jane's UMP-45. It isn't useable for the site's standards but I figured I'd show you guys anyway. 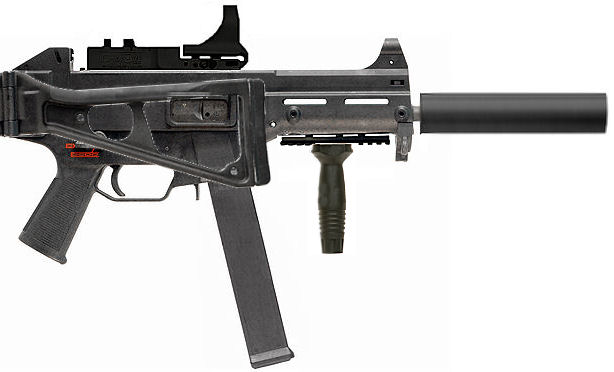 So you want me to set up and photograph a UMP in the same configuration? *sigh* I'll do it for you if you want. :) I'll add it to the list. At least you went to the trouble of outfitting it with the correct type of details so it make my job easier.... :) Heck, I'm still try to get a shot of a Henry and a Winchester 'faux' Henry ... hahahaha :) - MoviePropMaster2008

Does anyone know what guns john sticks on to her belt and where the came from?

Its listed as one Ruger mk3 and one Buckmark? I disagree. I own both pistols they look like they are both silenced Buckmarks. Could I get a second opinion? or check some screens with proof of the Mk3 bolt cycling? Thanks. -FuriousOyster

I just watched that scene again today they are both definitely Buckmarks. Due to that image of them holstered, Mk frames don't look like that, and I watched both the actions cycle. -FuriousOyster

BTW Buckmarks have aluminum frames to my knowledge not polymer. -FuriousOyster

I made a mistake in suggesting that the SOPMOD wasn't out until 09. It WAS out in 05 but that was not the stock used on the M14, according to some folks who worked on the set. Sorry for the confusion.MoviePropMaster2008 21:05, 25 October 2009 (UTC)

On the film poster, John Smith (Brad Pitt) is seen holding an unknown 1911 pistol. The shot is reversed in older posters (and this screencap) but is correct on the DVD cover.

It looks like a SIG GSR. This piece is FAR from a P229 Sport. There is a HUGE difference between 1911 frame and SIG P229 series. The Winchester

It actually looks like a GSR Target Stainless. The only problem is that the slide appears too short, although it looks normal length due to the compensator on the muzzle. - Gunmaster45

I dont think its a compensator. Theres no visible slots on the top. Granted, theres the obivious line and it looks slightly more polished than the rest of the slide, but that could be just a slide design. The Winchester

it kinda looks like the The Colt XSE that (Brad Pitt) is using through out the film. buckus386

True, but GM45 and I (avid 1911 fans) both disagree at that assumption. -The Winchester 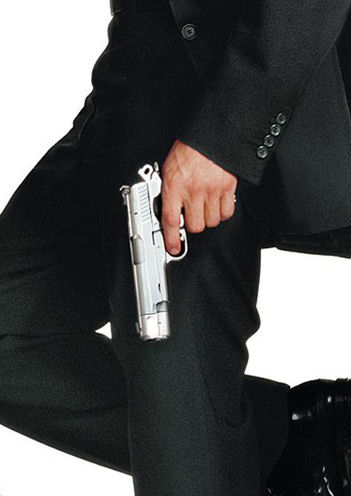 John holding his 1911. Note how shot is reversed.

I think it's a Colt Commander stainless with custom compensator. Dillinger

In the directors cut there is a part of that conversation where Brad asks "Are you counting inocent bystanders," make of that what you will.

Does anybody know what the knife is in the Menu?

Your image was deleted because IMFDB does not allow PNG files. Try it again :) MoviePropMaster2008

Depends on which one. I see a Karambit, Dirk, push dagger, and a tactical tanto blade. -Survivalkid21