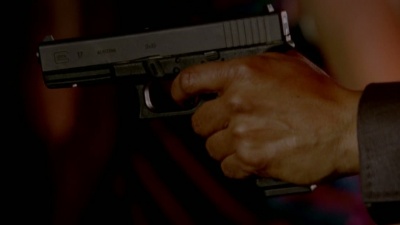 In "Sangre por Sangre" (S07E04), a hospital security guard is seen with an unknown revolver. 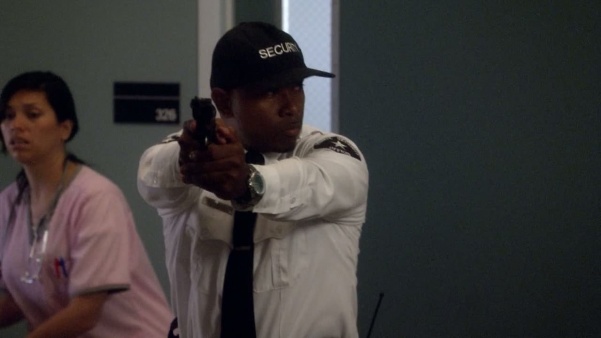 The guard aims his revolver while looking for guidance from Detective Danville. (S07E04)

I've decided I'm not going to list every single occurrence of the Glock's and Flack's SIG anymore. It Just becomes to much text and it's easier to just say that they are used whenever the particular character draws his weapon. For other weapons that are only used in one or two episodes, or when a Glock is used by a non-recuring character, I will make note of it. --Zackmann08 01:23, 23 February 2012 (CST)

I'm making sure that there is at least one image of each of the main characters and I'm keeping the best images up. Sometimes the best image in a given episode is so dark that you can barely tell who you are looking at. If the next episode has a scene in daylight, I use that image instead. --Zackmann08 16:16, 29 February 2012 (CST)

I'm a bit curious about the flare gun on the left. I think I came across one when I did Dylan Dog: Dead of Night. It looked like an Heckler & Koch P2A1 Flare Pistol, but with a smaller bore. It looks a lot smaller than 26.5mm. According to H&K, it can be adapted for 12 gauge flares, but even that looks too big. 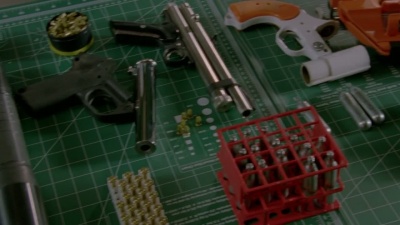 I have cross reference all the guns and the Actors who already have pages. I have not created pages for the other actors who make a one episode appearance yet... --Zackmann08 16:16, 29 February 2012 (CST)

I would never bother distinguishing between M4s and M4A1s. If you are basing the ID an the M4s having 4 position/fibrelite stocks (I can't make out the picture well enough to confirm if this is what they do have), then this would be technically correct assuming the gun hasn't been modified, as I believe all factory M4A1s were fitted with the later "M4" style stock. However, as this part can be changed in about 2 seconds, this is a bit thin to separate the gun into two sections. Also, the main difference is whether it is burst or auto, and seeing as most theatrical weapons will likely be built from civilian semi auto "M4s" fitted with either a drop in auto sear or a full auto lower from a different gun, separating the guns into two sections seems a bit arbitrary to me. --commando552 (talk) 19:41, 21 December 2012 (EST)