The Colt M1911A1 is the standard sidearm for all Allied armies and classes. 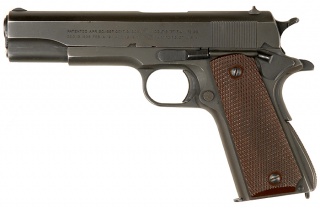 The Degtyaryov Light Machine Gun (DP) is the standard weapon for the Russian Assault class.

The M1941 Johnson Light Machine Gun is the standard weapon for the Canadian Assault class. 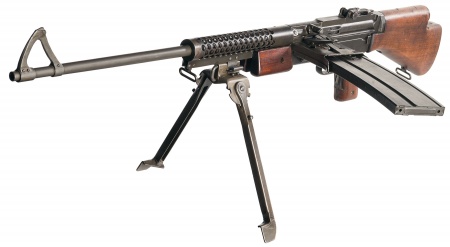 The Bren Mk.2 Light Machine Gun is the standard weapon for the SAS Assault class in the expansion pack Battlefield 1942: Secret Weapons of WWII.

The M1A1 Thompson Submachine Gun is the standard weapon for the American, British, and Canadian Medic classes.

The Sten Mk.II Submachine Gun serves as an alternative for the British and as the standard for the Free French Forces Medic class in the expansion pack Battlefield 1942: The Road to Rome. A suppressed version, the Sten Mk.IIS is also available in the expansion pack Battlefield 1942: Secret Weapons of WWII for the SAS Medic class.

The M1 Bazooka is the standard weapon for all Allied Anti-Tank classes.

In Battlefield 1942: Secret Weapons of WWII, the Browning Automatic 5 is issued to the SAS Engineer class.

The Lee-Enfield No. 4 Mk I is the standard weapon for American Army, British and Russian Engineer classes. A bayonet version is available in the expansion pack Battlefield 1942: The Road to Rome for the Allied Engineer classes.

The M1 Garand is the standard weapon for the American Marine Engineer class.

The Lee-Enfield No. 4 Mk I (T) is the standard weapon for all Allied Sniper classes.

The Browning M2 is the Allied machine gun mounted on Allied vehicles and fortifications.

The Mk.2 Hand Grenade is the grenade available to all Allied armies.

The Walther P38 is the standard sidearm for all Axis armies and classes. 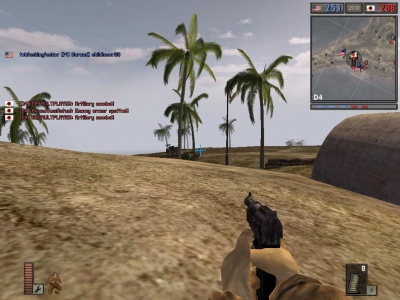 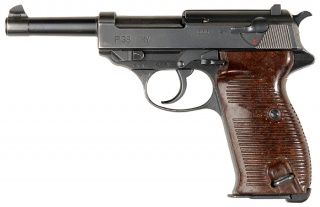 The Sturmgewehr 44 is the standard weapon for the German Assault class.

The Type 99 Light Machine Gun is the standard weapon for the Japanese Assault class.

The Breda Modello 30 is the standard weapon for the Italian Assault class in the expansion pack Battlefield 1942: The Road to Rome.

The Fallschirmjägergewehr 42 serves as an alternative to the Waffen SS Assault class in the expansion pack Battlefield 1942: Secret Weapons of WWII.

The Maschinenpistole 40 is the standard weapon for the German and Italian Medic classes.

The Maschinenpistole 18 is the standard weapon for the Japanese and Russian Medic classes.

The Panzerschreck is the standard weapon for all Axis Anti-Tank classes.

The Type 5 Garand copy is the standard weapon for the Japanese engineer class.

The Karabiner 98 Kurz w/scope is the standard weapon for the German, Italian and Japanese Sniper classes.

The Gewehr 43 w/scope is the standard weapon for Waffen SS Sniper class in the expansion pack Battlefield 1942: Secret Weapons of WWII.

The Maschinengewehr 42 is the Axis machine gun mounted on Axis vehicles and fortifications.

The Model 24 Stielhandgranate is grenade available to all Axis armies.

The Gewehr 43 and the sniper version of the Lee Enfield has 5 rounds in the game and should have 10 rounds instead as both rifles have 10 rounds. Also, they probably added American weaponry (just some) to the Russians' arsonal probably because they can't animate some of the Russian weapons. - Kenny99 05:34, 4 March 2010 (UTC)

Well, there's the issue that, unpatched, there is precisely one Japanese gun in the entire game, and most of the Allies use exclusively American guns. DICE was really, really lazy when it came to research on this game.--That's the Way It's Done (talk) 20:37, 18 December 2014 (EST)

So, is anyone working on this?

Is anyone still working on this page, I mean, the last post with a date is from 4 years ago and the only thing that has been added was two pistols. PaperCake 19:25 18 December 2014 (EST).

I don't think so, however the only thing I see that's marked four years old is the above post here on the talk page - The last edit on the main page was only six months ago (according to the edit history). It may still be a WIP by someone wanting to do it, but as pointed out, nothings been done in six months. In any event, if you feel like helping out and actually can contribute something worthwhile to the page, I see no reason to not go right ahead. StanTheMan (talk) 20:13, 18 December 2014 (EST)

How Does it Look Now?

I've had some screen shots sitting on my machine for a while now, so I decided to re-up them, readd the box art, and generally pretend this is the IMFDB page for the first game in a major first-person-shooter series. What do you think?--That's the Way It's Done (talk) 21:18, 23 March 2016 (EDT)

I think the page could benefit more from some rather needed cleanup in terms of formatting and layout, but ya have to start somewhere I guess - That said, your screencaps do look quite good. StanTheMan (talk) 01:22, 24 March 2016 (EDT)

Thanks. I have issues with this game and my rig, which is why all the pictures I uploaded are from two matches in Secret Weapons of WWII. I'll take some more caps later and upload them as well; I need to find this mysterious historical accuracy patch people keep mentioning, because I've only played the un-patched version, where everyone uses American and German weapons almost exclusively. --That's the Way It's Done (talk) 10:24, 24 March 2016 (EDT)

While it may be part of what the game calls the 'assault kit', the weapon can't be (and indeed isn't) classified as an 'assault rifle' by the term's generally-accepted technical definition, which is what we go by for the purposes of listing and categorizing firearms on pages. It should be put in the 'Light Machine Guns' section (which should be simply named 'Machine Guns' for the sake of simplicity and inclusion, as again is done on other pages). StanTheMan (talk) 01:43, 25 September 2016 (EDT)

I'm going to disagree with you on both, and I'm going to tell you why in both cases. For the BAR, it's pretty straight-forward: it's the Browning Automatic Rifle, not the Browning Light Machine Gun. If you want to be really technical, it's actually a battle rifle, since it fires a full-sized rifle cartridge and is capable of automatic fire. From a stylistic stand point, this would leave the only assault rifle in the game the STG.44, which at the time was considered a machine pistol (as was the AK47 a few years later when the US first encountered it). I don't like the idea of having a weapon all alone in its subheader (the A-5 is the one exception since it can only be a shotgun) and it doesn't quite feel right to roll everything under the "rifle" class, even though I would be more in favor of that than classifying the BAR as an LMG. Capacity wise, it isn't one, since it's not capable of long sustained fully-automatic fire (due to having a very small capacity), so it isn't at all a good suppressive fire weapon (what a machine gun is designed for); in an era of primarily bolt-action rifles it makes a decent Squad Automatic Weapon, but it was fielded in much the same way the M14E2 was, and we all agree this was not a machine gun. Unlike the LMGs featured in the game (the Bren, the Modello 30, the DP, and that Japanese gun I can never remember the name of), the BAR is very clearly purpose designed and built with the idea of mobile fire in mind, rather than taking existing machine gun concepts and hastily adapting them as a single man-portable weapon (i.e., the Bren).
This is from the main page description of the BAR on IMFDB (note it does earlier refer to the BAR as an LMG, for honesty's sake):
"While heavy, it had a relatively low capacity for a support weapon (most period LMGs using a 30-round magazine compared to the BAR's 20) and a fixed barrel which could not be easily changed out, making it unsuited for protracted fire. It was often employed in a capacity more similar to a modern Designated Marksman Rifle, with the BAR gunner being tasked with extending the squad's range of fire and suppressing enemy snipers."
As for the "Machine Gun" category, I have them spaced this way specifically because there are also mounted heavy machine guns (the Browning M2 and MG42), which are treated differently by the game and which I am in the process of adding to the page.
I can definitely understand your argument, but I'd like to have things stand as of now just until someone else can weigh in as well. --That's the Way It's Done (talk) 14:28, 25 September 2016 (EDT)

While yes, it was designed as merely an automatic rifle, it was used as a SAW/LMG, which is why it doesn't compare well against other weapons designed as LMGs like the Bren. I'd definitely lump this with the LMGs here. --Funkychinaman (talk) 15:09, 25 September 2016 (EDT)

The main page for the BAR lists it as a LMG, and on most IMFDB pages for movies and video games the BAR is listed under the "Machine Guns" sections. I'm not 100% sure if that's the correct way to do it though (but it is correct at least for other variants such as the BAR M1922). So I'd say either put it in the Machine Guns section, or in a "Battle Rifles" section along with the M1 Garand, Type 5 and FG 42, as well as the non-scoped versions of the Lee-Enfield and K98k. --Ultimate94ninja (talk) 15:22, 25 September 2016 (EDT)

FCM said it. I agree it isn't best suited for the role of a SAW, doesn't change the fact that's very much what it was used for at that time. In any event, the point is the B.A.R isn't truly considered an 'assault rifle' as the term has since been defined, plain and simple. Calling it a 'battle rifle' I think would be inappropriate as well; it doesn't fit the generally accepted term either as I understand it (though I'd concede that'd be closer than calling it an assault rifle). You mention the M14E2, it isn't really considered an 'assault rifle' either, so I don't see the point of mentioning it as any argument in favor. The AK and StG44 might have been called MPs/SMGs then but those were misnomers - they aren't called that now and aren't listed as such on the site. Bottom line, we generally classify the respective firearms by what they're considered now, not necessarily how they were considered then, nor what they're considered/classified within the game. You can certainly make additional notations in writeups, but as it stands listing the gun differently than how it's listed on the vast majority of the rest of the site just seems arbitrary and confusing. The LMGs/MGs deal is more a stylistic choice, that I don't care about so much, except to say game aesthetics again are rather irrelevant in this regard, and we do generally lump them together as a rule, again for the sake of simplicity. StanTheMan (talk) 16:39, 25 September 2016 (EDT)

These new images are provided by fellow Battlefield wiki editor Slopijoe. I had received permission from him to upload these images to IMFDB. Wuzh (talk) 04:37, 28 February 2018 (EST)