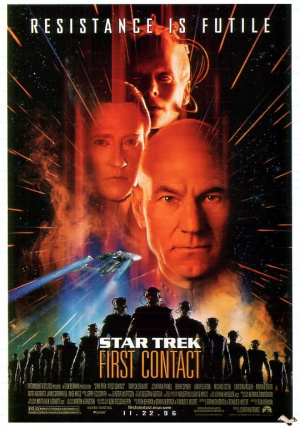 The following weapons were used in the film Star Trek: First Contact:

When Captain Jean-Luc Picard (Patrick Stewart) and Lt. Commander Data (Brent Spiner) are inspecting the Phoenix spaceship (in fact a prop assembly build around a real Titan II ICBM) after the Borg attack on the launch site, they come under fire by Lily Sloane (Alfre Woodard) who is wielding a Calico M951 submachine gun fitted with a weaponlight and EOTech red dot sight. When he confronts Lily, Data is greeted with a full-auto burst, but is unharmed by the barrage thanks to his robotic nature.

When he confronts Lily, Data is greeted with a full auto burst.

While being pursued by the Borg aboard the Enterprise, Picard and Lily duck into a holodeck running a 1930's-era mystery simulation. Picard promptly confronts several gangsters in the simulation and commandeers an M1928 Thompson from a violin case, using it to mow down the Borg drones chasing them, continuing to fire until he empties the weapon's 50-round drum magazine and then goes to beat them with the butt of the weapon but is stopped by Lily. When Lily asks how a supposedly holographic gun was able to kill living creatures, Picard explains that he had deactivated the holodeck safeguards.

Picard retrieves the Thompson from a violin case in the holodeck.

Picard fires the Thompson. The muzzle flash here appears to be CGI.

When asked how a supposedly holographic gun was able to kill living creatures, Picard explains that he had deactivated the holodeck safeguards.