Seven Blood-Stained Orchids (Italian title Sette orchidee macchiate di rosso, German title Das Rätsel des silbernen Halbmonds ("The Riddle of the Silver Crescent")) is a 1972 Italian-German thriller directed by Umberto Lenzi. Giulia Torresi (Uschi Glas) survives an attack of a serial killer. She helps the police to pinpoint the suspect, but soon Giulia begins to doubt and thinks that she accused the wrong man. Together with her groom Mario Gerosa (Antonio Sabato), Giulia begins her own investigation. Meanwhile, the maniac kills again and again. All his victims turn out to be guests or employees of a small hotel at the same period of time.

The film is released as the 32th and the last installment in the Rialto Film studio film series (1959-1972) adapted from the works of Edgar Wallace. In fact, the movie is a typical Italian giallo film without any connection with Wallace's works.

The shadow of the pistol perfectly reveals the model.

The pistol is seen in darkness.

Three revolvers are seen on the wall in Sartori's apartments. The revolvers on the top and on the bottom are supposed to be Lefaucheux Model 1858 while the one in center resembles a Webley RIC but lacks the extractor (maybe this piece is just broken). 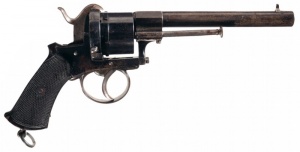 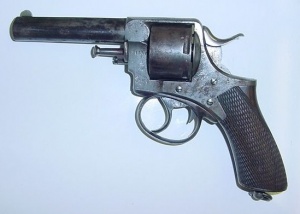 The revolvers at the bottom and in center are seen.

The revolver on top is seen better.