The Secret of the Black Widow (Das Geheimnis der schwarzen Witwe) is a 1963 German-Spanish B&W crime thriller directed by Franz Josef Gottlieb and based on the novel "The Queen of the Night" by Louis Weinert-Wilton. A London journalist Wellby (O. W. Fischer) is involved in the investigation of a series of strange murders. Former members of an expedition in Mexico are killed by poison darts with the image of black widow spider. The investigation leads Wellby to the acquaintance with Clarisse Avery (Karin Dor), the daughter of the expedition leader who died in the jungles under mysterious circumstances.

The following weapons were used in the film The Secret of the Black Widow (Das Geheimnis der schwarzen Witwe):

Boyd (Klaus Kinski) draws a revolver when he saves Wellby who is assaulted by Selwood's bouncers. This revolver is an Arminius model, most likely HW-1.

Boyd draws his revolver. The gun has the common appearance of Arminius revolvers of 1960s though the barrel is maybe too long for HW-1.

A Walther LP-53 is the murder weapon throughout the movie. The ajustable rear sight is removed from the gun (the screws on the top strap can be seen), and the pistol has a shorter barrel than the standard model. It's worth noting that the usage of LP-53 for shooting poisoned darts is a common plot item in 1960s films (for example, That Man from Rio and The Majordomo).

The air pistol is seen during the second murder.

A close view of the muzzle and the front sight.

The pistol is seen during the fifth murder.

She shoots the gun.

Helen aims at Clarisse in the scene in Wellby's houseboat.

Wellby (O. W. Fischer) owns a bright chrome plated Llama II pistol. In the final scene this gun is used by Helen Osbourn (Doris Kirchner). The exact model of this pistol can be estimated judging by the lack of the grip safety that exists on generally similar Llama III. 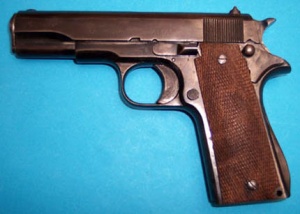 Wellby draws the pistol finding an intruder in his houseboat.

The external extractor is seen.

The Llama logo is seen on the grip.

The grip lacks the safety.

Helen takes the pistol that Wellby carelessly left on the table.

Helen holds Clarisse at gunpoint during the boat chase.

When Clarisse Avery (Karin Dor) comes into William Osbourn's house, she is armed with an Arrizabalaga Sharp-Shooter pistol, a Spanish gun of 1920s with tip-up barrel. The size of the gun and the position of the safety allows to identify a version chambered in .32 rather than in .25. 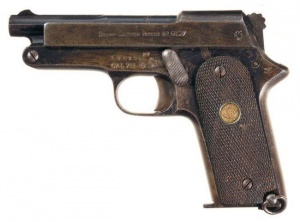 Clarisse enters the room with a pistol in hand.

She aims the pistol at Osbourn.

A view of the muzzle. The pearl or ivory grips are seen.

Bryan (Angel Menéndez), one of the members of the expedition, owns an Astra 400 pistol. Inspector Terry (Felix Dafauce) and Boyd (Klaus Kinski) hold Astra pistols in the final scene. In the same scene Helen Osbourn's Llama pistol switches to the Astra due to a continuity error, and then back to the Llama. 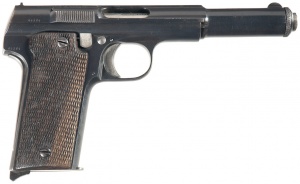 Biran reloads the pistol. The heel-mounted magazine release is seen.

One more view of Brian's pistol.

Inspector Terry holds his pistol at the left.

Helen's Llama switches to an Astra during the boat chase.

Boyd fires an Astra during the boat chase. 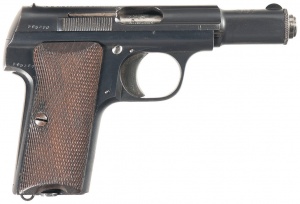 Several antique pistols are seen on the wall in Selwood's apartments. They aren't seen clear enough for positive identification but at least the bottom one appears to be a percussion cap gun. Possibly these pistols are non-firing wall-hangers.

Five pistols are seen on the wall at the top left. The bottom one seems to be a percussion cap gun. The second from the bottom gun may be not a pistol but a revolver.

In the final scene two plainclothes police detectives are armed with an MP40.

A detective with an MP40 runs out of the car.

Another detective holds an MP40 at the right.

A photo of the expedition shows some of the members with rifles in their hands. William Osbourne's (Werner Peters) rifle is the only one that is seen clear enough for the identification. This is a lever-action Winchester-style rifle, and following the fact that the movie was filmed in Spain, we can make the assuption that Garate El Tigre is most possible guess.

On the same photo rifles are seen in hands of Morton (uncredited), Cartwright (José María Caffarel) and Broomfield (Antonio Casas). This guns hardly can be identified.

Morton's (sitting at the left) rifle seems to be a bolt-action gun. It is hardly possible to make any assumptions about Cartwright's and Broomfield's guns.

In the scenes, set in Selwood's club, several light gun shooter games are seen. One of these light guns is a very faithful copy of Mauser C96. Note: the best known shooting gallery with Mauser-style light gun is Dale Gun Shooting Gallery, but it looks different.

The light gun is a very authentic looking Mauser C96.

Same shooter game in the empty club at night.

The light gun of another shooter game.