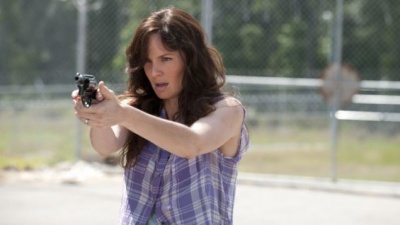 Sarah Wayne Callies as Lori Grimes with a Colt Detective Special in The Walking Dead - Season 3.

Sarah Wayne Callies is an American actress well known for her roles as Lori Grimes in The Walking Dead, Sara Tancredi in Prison Break, and Katie Bowman in Colony. She also appeared in the films The Celestine Prophecy and Into the Storm.