Moonlight is a 2016 crime film that observes a black man through three significant stages of his life. The film's cast included Mahershala Ali, Naomie Harris, André Holland and Trevante Rhodes. Moonlight would go on to be nominated for eight Academy Awards and won three, including Best Supporting Actor for Ali and Best Picture.

The following weapons were used in the film Moonlight (2016):

What appears to be a Smith & Wesson Model 19 is seen throughout the film, notably pulled out by "Black", formerly known as Chiron (Trevante Rhodes). 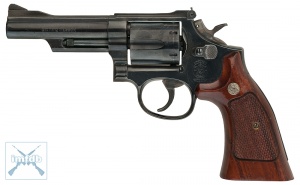 Screen Used Smith & Wesson Model 19 - .357 Magnum. This is the hero gun held and used by Clint Eastwood in the film In the Line of Fire.

The revolver is seen in the hands of Black (Trevante Rhodes).

The Beretta 92FS appears to be carried by police officers making an arrest.

The Beretta in the holster.
Retrieved from "https://www.imfdb.org/index.php?title=Moonlight_(2016)&oldid=1156706"
Categories: